We woke up yesterday with a mission: we were going to spend one last day basking in the Arkansas sunshine before heading for the cloudy, cool, west coast.  I had packed our bags the night before... laid out towels and clean swimsuits, loaded up on snacks, we had even explained to the dinosaurs about the fun day they were going to have in the river.  We left kinda-sorta on schedule and swung by Sonic to fill our bellies.  But as I waited for my chili cheese dog (I'm a paradox, I know), I noticed that those early morning clouds weren't really burning off in the afternoon sun.  In fact, they were kind of gathering up even more.  But I just hoped for the best and headed out.

The drive was still beautiful even in the smothered light that was barely filtering through the clouds.  There was a little barn just on the side of the road that I had noticed on our last trip, and this time I had tucked my camera within arm's reach so that I explore a little.  Last time, it was friendly, red, and inviting... this time, not so much.  With the grayness hanging all over everything, it suddenly seemed threatening and haunted. (Probably doesn't help that this book I'm reading includes a ghost in an old Ozark cabin).  I kept expecting to see some girl's face in the windows, so I took two pictures while standing in the doorway of the car, then locked the doors and drove away. 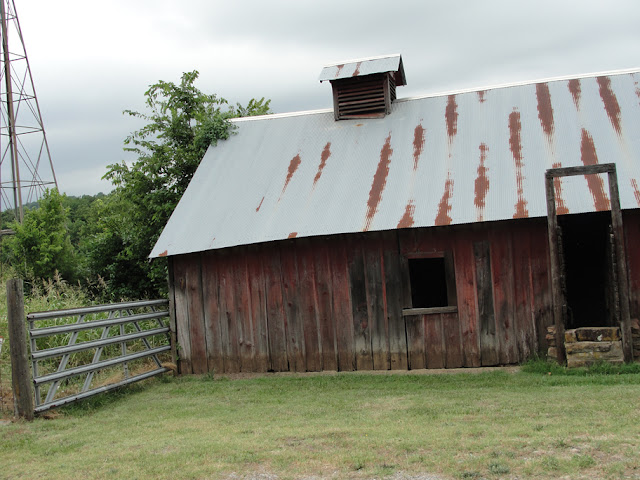 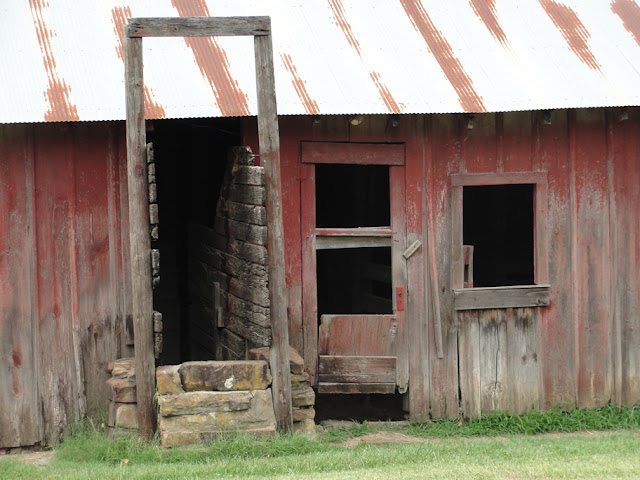 Our little spot at the river wasn't far from the barn, but by this point I could tell rain was coming quickly.  And yet, I'd already driven that far and had no back-up plan, so I just kept heading that way.  I passed a small diner and considered waiting out the storm there, but we had just eaten so I decided against it.  Passed an empty parking lot with a nice view of the hills and considered just parking and reading more of my creepy Ozark ghost-story, but knew Annika would never allow it so decided against that too.  Passed "Velda's Country Thrift Store".... bingo.  We flipped a U-turn and pulled in just as the storm was really rolling in.

The woman there was eldery and running the place by herself, so I put Annika on an old rocking horse and helped her to drag all the outdoor display items back inside.  Kindness always comes back... and sometimes, when you help someone who owns a thrift store, it comes back in the form of awesome discounts.  We found a few treasures and got everything at almost half-price. 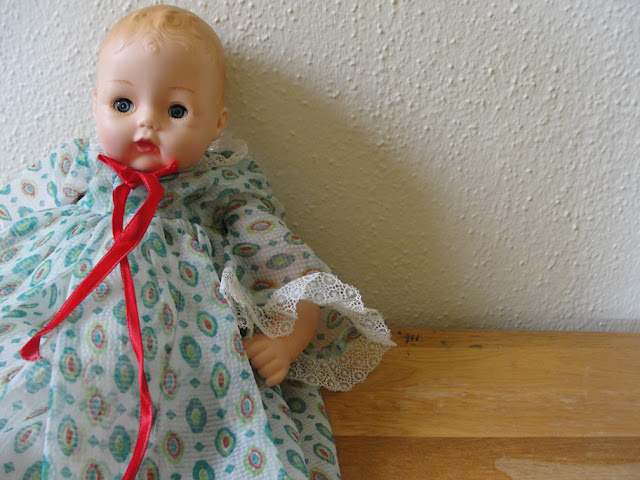 Isa got this vintage, handmade two-piece dress for $1.  We only had Chicken at the time, so Chicken wore the dress first, but when we got home it went right on Isa and fit perfectly. (I do feel for poor Chicken sometimes. Her little bead-eyes are even a little crossed.)


I found a butter churn, which is an idea I've been toying with since I borrowed one from our farm friends recently.  Its not totally rare to find one at these old shops, but the ones I've come across are usually large, rusty, and over-priced.  Mostly for collectors, I guess.  But this one was perfectly clean and usable and, the best part?  Only five dollars.  She dropped the price without my even asking... I think she was impressed that (1) I knew what it was, and (2) I wanted to use it. 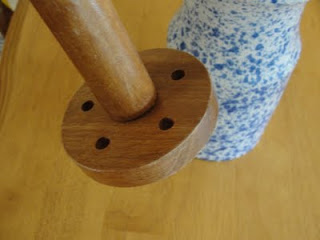 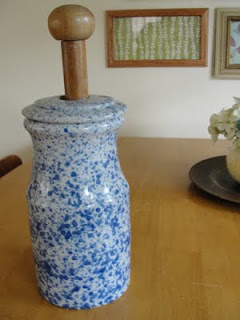 I placed the churn on the counter next to Isa's new dress, and meandered back through the store, letting Annika slowly discover all the old toys and kitchen tools that she recognized.  Of course, with all the interesting vintage items everywhere, she found a cheap, plastic Mufasa that she carried around with her the entire time, putting him inside old mailboxes or tucking him into the folds of a quilt.

Just as we were on our way out, a collection of beaded necklaces by the counter caught my eye.  I fingered through them as she totaled our items and instantly fell in love with one that I pulled out and held up in the light.

"Its pretty, ain't it," She said, glancing over her bifocals.
I looked over my shoulder at her.  "I'm not allowed to buy things like this," I laughed, but kept admiring it affectionately. It was $10, which is way more than I'd ever pay for a necklace that wasn't made of pure gold and ancient, royal, jewels.  "I know its a big drop from ten, but I'd pay five for it," I said hopefully.  (After all, it did look like pure gold and ancient, royal, jewels.)

She considered it for a moment, and said she'd have to get permission from the seller for that kind of discount.  I pretended not to listen as she chatted quietly with the woman on the phone.

So, I left Velda's with one extra special treasure. 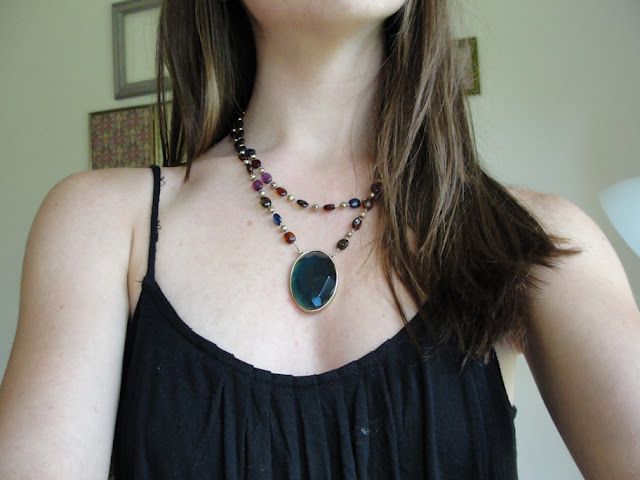 On the way home, it started to hit Annika's understanding that we were not going at all to the river.  I tried to think of things we needed to do and what might be fun for her.  She went from near-tears to excited squeals when I told her that we were going to visit our friends and their new baby.   I think she looks good with a baby, don't you? She'll be a good big sis one day. 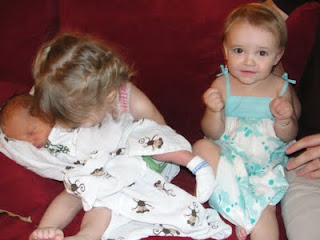 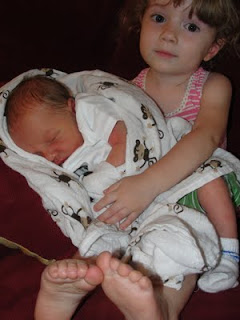 In the second picture, I had asked Annika's friend to "squeeze" into the picture, so this her "squeezing," haha.  We didn't stay long, but just long enough for my friend to cut my hair and for Annika and her friend to get butterfly tattoos.  Its actually Annika's second tattoo this week.

When we came home and unloaded our things, I noticed the sky starting to look a little bluer.  By the time I put Annika down for a nap, the sun was shining like it had never left.  I hurried back into my swimsuit and laid in the yard with my book and oreos for an hour.  I even watched a funeral procession in my bikini.

It was a good plan B, for the most part.  We both got "special prizes" and got to see friends... I even still got a little bit of a tan.  And to top it all off, I had the motivation to speed through finally cleaning the floors before the sun went down.

I love this house.  And as much as we are loving our last bit of summer in Arkansas, we can't wait to head for Seattle this Saturday! 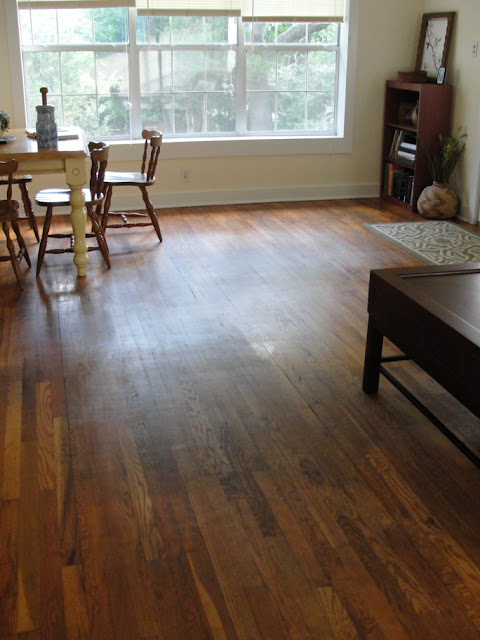