Detox from my Addiction 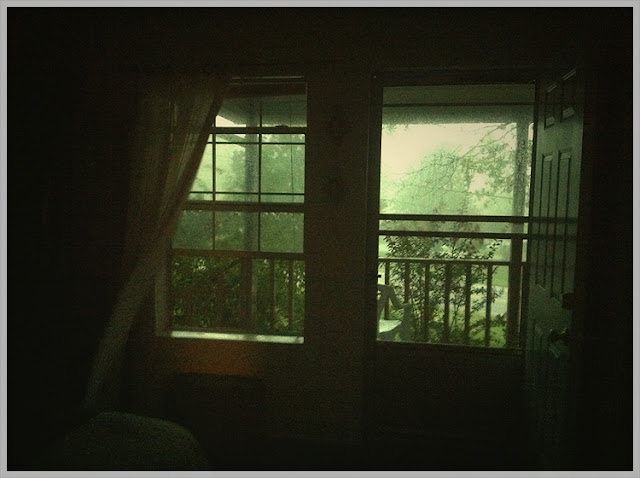 The windows in this old house, one already shattered from a wind-swept tree limb last summer, were open on purpose. A storm was coming and I want to hear it. Smell it. Feel it. I watched the radar map on my phone and hoped the darkest colors would pass right over us. A crazy storm- I needed one.

Because it just feels that way sometimes. Chaos inside craves chaos outside. I was feeling busy, stressed, anxious and wanted something wild to force everything else to stop and slow down.  A crash of lightning very nearby sounded threatening so I hurried around the house, flipping off switches and pulling cords out of the wall. The purring hum of electronics yanked suddenly to silence.

The storm wasn't that bad but I wanted to be careful.  And okay, I felt like being extreme.    I lit a candle and sat on the couch, Annika in my lap, and listened to the wind rolling past and branches scraping up against the house and tires splashing through puddles on the street.  She relaxed and leaned back into me, listening too.

This, I thought.  I want more of this.

Since it's usually me that does the crazy talk around here, I was surprised when my husband started talking about iPhone addictions.

He also remembered his pre-smart phones days of being a pilot on reserve, and how he despised having to carry his phone around at all times, compared to now when it seems like a necessary extension of the self.  We do it by choice because we want it close.  We think we need it.  Ball-and-chain because we like it that way.

I held his hand, so thankful for a Crazy like me, and told him we could help each other be different.

Looking it Straight in the Eye

I was stirring eggs this morning with Annika sitting on the counter next to me, like always. I sipped my tea and listened to my mom's old radio that I have rigged up over the oven.  The moment felt peaceful and looked lovely and, true to my addiction, I couldn't let it pass without Instagramming it. 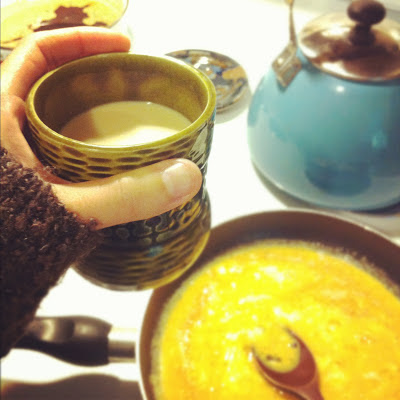 And as I listened to the program on the radio, I realized they were discussing our modern addiction to technology and social media.  I sent Annika off to play and listened intently as they defined so much of what I've been feeling these days, for years, and what my husband is now recognizing and what we all so desperately need to hear.

This overexposure to the digital world can actually re-wire our brains and make them less efficient.  Our addiction to speed, pleasure, and stimulation has begun an accelerated evolutionary process that is causing some parts of our brain (like our capacity for full attention and stillness and tranquility) to starve and shrivel.

Our kids, they are the ones in the most danger.  We (and I am part of the last generation to say so) remember when things were at least a little different, we grew up without Facebook and smartphones and we got the chance to be bored without an excess of buzzing, flashing, beeping gadgets.

But our babies are literally weaned up on digital training devices and their lives, at a very early age, are filled up with the flashing images of television, internet, and electronic toys.  And we teach them how to become addicted.  We model our own dependence on these things so constantly that it becomes their "normal".  Permanent re-wiring.

When I pulled the plug on everything around me and let my ears be filled instead with the quiet, with the sounds of the storm, it felt good.  It felt like goodness.

And I've felt it before and I've said it before and I'm not sure when it'll ever really sink in but I have got to unplug.  I need to rest my eyes from this blue glow of my computer screen.  I need to put my iPhone away and look around me instead. To stop texting and look up into the face of the kid who wants to play dinosaurs with me.  And maybe not even take a picture when she looks completely nerdy and adorable lining them up by species, size and color.

What would happen if I just experienced moments instead of being so concerned about documenting them?

I need to detox from my addiction.  I think we all do.

More Reading:
What I heard on the radio, complete with suggestions for digital boundaries: http://www.thedigitalinvasion.com/blog.php

"How to Miss a Childhood" by HandsFreeMama:
http://www.handsfreemama.com/2012/05/07/how-to-miss-a-childhood/
Labels: family Home and Family parenting personal stories