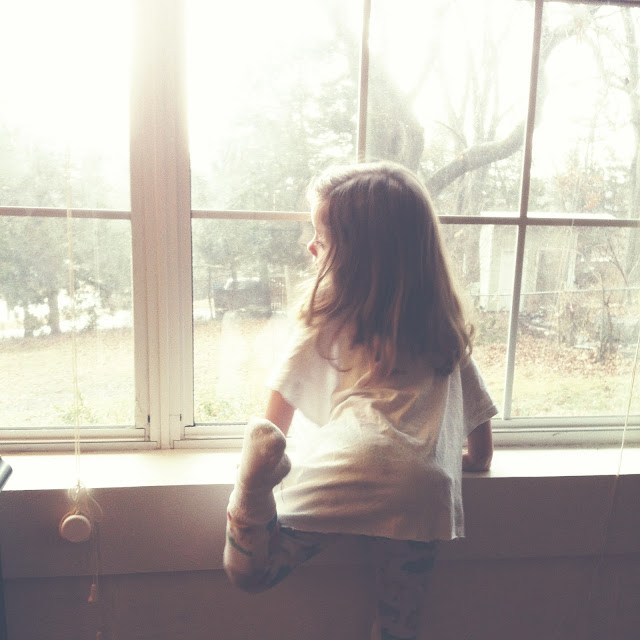 Before we knew Annika needed glasses, we thought she had a brain tumor.

But we had noticed her left eye was occasionally doing a weird drift-thing sometimes. It would point inwards and make her look like she was crossing her eyes.  At first we thought she was just being funny but we eventually realized it was happening all on it's own. So I did the worst thing any concerned parent can do with a random symptom: I Googled it.  I searched "sudden onset lazy eye" and read through forums of other mothers noticing the thing.

And, there it was.  That unwelcome but familiar stranger standing on my doorstep with no face. Again.

Awful, ugly, toxic fear suddenly entered in like he owned the place.

I tried to be logical; it's usually never the worst case scenario....  but, oh God, sometimes it is.  For some people, it is. My imagination was spinning out of control, telling me that I had no right to assume we'd be the lucky ones that get off easy.

"You know things have been way too peaceful lately," Fear said.

"You think you're so much safer than anyone else?"

"Weren't you just talking about trusting God through suffering?"

I called my husband and spilled it all out in a hushed voice while Annika was marrying her dinosaurs in the other room.

There wasn't much to be done immediately besides making an appointment with an optometrist.  We scheduled the quickest visit we could, but that was still a few days away.  A few days of excitedly talking to Annika about the possibility of glasses and a few days of wondering quietly between ourselves: what if maybe, just maybe, that wasn't the outcome of our appointment.

The question seemed to hang like a quiet knife over all of our beautiful moments. So much so that after tucking her in at night, I would shut the door and fight the urge to cry.

What if things were about to get really, really hard?

I finally stood outside her door one night and remembered the scripture about how there is a time for everything.  A time for mourning and a time for rejoicing.  Everything in it's season.

I took a deep breath.  There was no point in crying tonight over what might happen tomorrow.  I decided I wasn't going to mourn until I had something to mourn about.

And then came the appointment.

It went quickly.  Yep, she's farsighted.  Yep, she needs glasses.  And yep, everything else looks just fine.  I never thought the sentence "those optic nerves look magnificent" could sound as lovely as it did that afternoon.

We drove away with nothing but a prescription for her lenses and I had nothing but a happy blog post and adorable pictures of trendy new tiger-striped glasses.

But for some reason, that knife has still lingered.

The "What if" still whispers into all things good and makes them suddenly sad and bittersweet.  It reminds me of the ones who don't get good news.  It makes the good things feel almost wrong and dangerous to embrace.

I don't invite Fear in, but I can still hear him.

"You know this can't last forever," he says through the locked door.
"Why are you the lucky one who's kid doesn't have a brain tumor?"

And I just can't help but hear it because- honestly? This world is a scary and unfair place to live.  It's tough to tell the devil to shut-up when sometimes he's making some really good points.

Not only do I fear a drunk driver running off the road into our yard, or a tree branch falling, or hidden brain tumors in Annika's head, now I know it's possible for a sinkhole to literally swallow up a person just lying in their bed. (If you hadn't seen that yet, crap. I'm sorry.  Don't Google it.)

It's just frightening to live off of the fruits of this poisoned, earthly soil.

It feels so dangerous to be fed and filled up with whats around me in a moment because it's all so fragile, so fleeting, so unable to sustain me. There are no guarantees that any of it will last.

And yet, God offers so much joy in this life, on this earth, and he gives it freely and with love. When we accept that all good things come from him and take it all in as a gifts from a loving Dad, it becomes more than just enjoying earthly fruit, it becomes worship.

And if seasons change and the fruit is gone and we find ourselves lacking or hungry or broken, we will somehow finding ourselves still worshipping.

The seasons, they never last.

But the worship does.

So when I hear Fear lately reminding me that maybe, just maybe, this season isn't going to last, I tell him he's probably right.

But I don't know what's next and neither does he.

Maybe the next season will be something even more wonderful and beautiful than it is now?

Maybe it wont. Maybe it will really suck.

But there is a time for everything and what can we do besides walk through these seasons in their time?  Fearing the ugly possibilities of the future will not make me stronger or more able to handle them, so its only a lie that says I must focus my attention on them.

I'm going to worship him in everything, even the good things, and know that tomorrow doesn't belong to me.