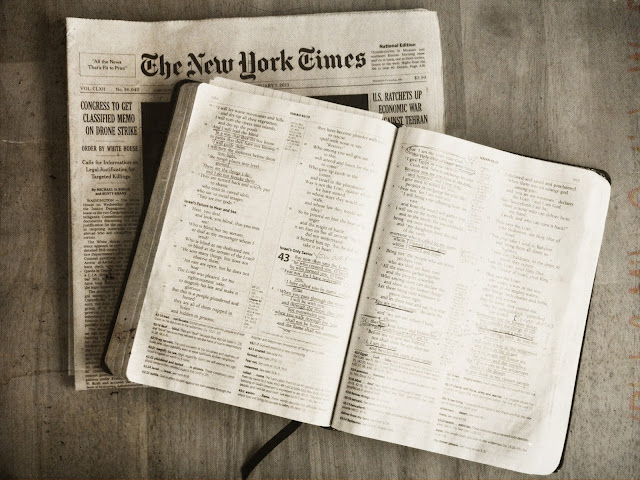 I'm starting to wonder about my ideas of what is good for Christianity.

What is good for this world.

I have so long wanted a return to something more simple, a life more wholesome and less conflicted and not so polluted with evil and selfishness. I've read about times when the American family was more stable and culture was less sexual and the Bible was respected in government and school and acknowledged as a good moral foundation for the country.

Sounds pretty good to me.

But here's the thing: maybe the old times and the old ways in which Christianity lived among and within society are not meant to be unchangeable. Maybe that kind of society is not even able to survive for too long because, let's be honest with ourselves, precious few things in this life are eternal.

The Gospel of Christ lives outside of the patterns of this world, it does not live and die among them.

So when society begins to change, when the modern world begins to reach outside the Bible for it's identity and values, what do we do?

Do we try to drag the Gospel and the Gospel's previous effect on culture into the modern arena?

Do we keep fighting, keep pushing, to defend what we perceive as being a healthy society based on Christian values?

I listen to Christian radio while I sip my tea and fry eggs in the morning, so I hear it.  I know that it's basically assumed that Christianity is thriving and purposeful when it's affecting and defining the morals of our culture.  But what happens when so many disagree and want to reject it?

Is it still then the best thing for Christianity to be the definer of rules and laws, the dominant influencer of culture at large, OR.... do we need to accept that it simply no longer is -and that has nothing to do with whether or not the Kingdom of God is alive in this world?

The Gospel and the way it lives and breathes among people have always been two different things.

The way Christianity affected government, schools, traditions, and moral values in Colonial America (my personal Happy Place) looked very different than the way Christianity looked as it was lived out by a missionary among the tribes of Africa or the way it took root on the shores of the Pacific Islands, or the way it looks now in the homes of new believers in Muslim countries or in the underground churches of China.

The Gospel is a seed more than an already-grown-up-tree, and that's true as it's carried from one people group to another and also true as it is carried along throughout history, throughout the years of an ever-changing world.  Maybe we need to accept that the more we try to uproot and replant this one tree (what we believe to be a healthy Christian culture in American society), the less healthy the tree is going to be.

Like it or not, the soil is changing and that tree can't survive forever.

What if we stopped worrying so much about defending our rights, preserving our way of life, and just embraced the opportunity to replant?  Maybe it's time to discover what this new season of Christianity must be - how the Gospel will live in a modern world that is no longer conducive to it.

Because I have to admit, the more I love Jesus, the less I care whether or not my dollar bill says "In God we trust" or if evolution is being taught in public schools or whatever else is being elevated as the current headline of religious news.

The more I love Jesus, the more I want to love and act and think like he did, the more I start to wonder about what's my fight and what's just not my fight.

The Gospel is the thing we live and die for, it is the only thing worthy of so much time and attention and energy.  The rest is beyond our control and I'm flat-out weary of the burden that says we're losing if we can't keep things the same.  In fact, I think it's a lie that says we are winning victories for the Kingdom when we manage to maintain some sort of biblical-looking culture among a people who disdain it.

And who disdain us for it.

And I don't write this to push politics one way or another. I write this to say I might just be ready to lay the burden down and admit that the best thing for Christianity may be to lose the war in a cultural/political sense.

It's never been about an earthly kingdom, anyways, right?

Jesus could have done that himself.  He could have gone straight to the top and changed the world that way, but he didn't.

He started low and stayed low and then laid down his rights and died low. And it wasn't a loss for the kingdom, it was a win. It was The Win.

So if we live in a world where it seems like we aren't winning, maybe that's okay.  Maybe that's good, even.  Maybe it will help us to become more like Jesus.

So we can take courage and have hope.

Courage to become who we are called to be in this world, in this time, and hope that believes it's going to be a beautiful thing.

“Remember not the former things,

nor consider the things of old.


Behold, I am doing a new thing;


now it springs forth, do you not perceive it?


I will make a way in the wilderness


and rivers in the desert.
The wild beasts will honor me,
the jackals and the ostriches,
for I give water in the wilderness,
rivers in the desert,
to give drink to my chosen people,
the people whom I formed for myself
that they might declare my praise.
Isaiah 43: 18-21