Of Jumper Cables and Helpmates 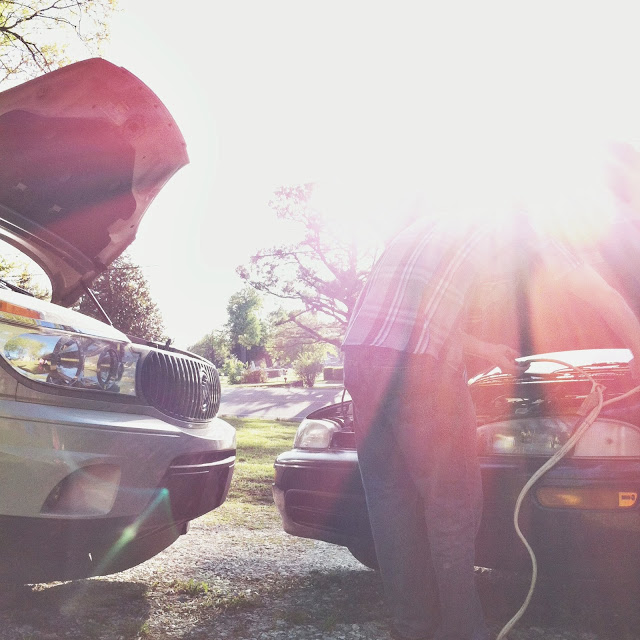 We weren't having the best of days.  Our big, all-important garage sale had been compromised with cold rains all weekend, we had recently learned that we were only one of ten applicants for the rental house we were competing for in Seattle, and when we were finally about to stop sulking and escape to a friend's house... our car wouldn't start.

And it was the "good" car, too.  Not my husband's fifteen year old Geo Prism that can barely make it up an Arkansas hill, but the big SUV that is supposed to be the one we can depend on.

I tried to put a brave face on it.  I kept a positive tone in my voice and took Annika to play in the grass while Josh searched for jumper cables.  But if you know us well, you know we both have our weaknesses.  My husband's being a tendency toward negativity in stressful situations and mine being a heightened sense of superiority when others are being too negative.  (It's somewhat of a toxic combination sometimes.)

He grumbled about how the Geo was technically the lesser of the two cars...older, smaller, weaker engine, whatever... and yet it starts every time he turns the key.

I sat in the grass and harbored my own quiet grumbles on the inside.  Why do I have to be the one to set the tone? Why can't he fight for our positive attitude?  Isn't he supposed to be the spiritual leader? Maybe I'll get all frustrated and mad at life. It's only fair.

And then from my little spot in the grass, I began to hear the neighbors.  It's never good when I hear the neighbors.  They were fighting - again.  And it was awful - like always. And I know they have small kids in that house and I have seen her planting flowers in perfect rows and I have met his eyes when I'm out in the yard and he storms out of the house with a flurry of cursing and hateful promises.

I felt anxiety and sadness like heavy hands pressing down onto my chest.

Annika was running back to me, dandelions in hand, ready to be wished away. Josh was standing by the cars as both engines ran, flipping through a manual and wiping sweat from the back of his neck.  (Now that the garage sale was over, the sun was shining high and hard.)

And my grumbles were expelled as I blew dandelion seeds into the air and Annika and I watched them spin daintily down into the grass.  I met the neighbor's eye again as he pulled his luxury car out of our shared driveway and ran away from the fiery battle raging inside their beautiful home. My heart broke for them all.

I suddenly didn't care if our stuff didn't sell or if our car was busted or where we might live in Seattle.

Josh was still standing there in silence, reading the manual and feeling the weight of all our issues.  I watched the little Geo pump life through the cable veins into the bulk of the big SUV.  There's not many things the Geo is good at, but this is something it can do.

The engines hummed beside us and he had no idea what I was thinking, but I hugged him hard and imagined that I was transferring life back into him.  Charging him back up.

Isn't it sad and strange how the fights always seem to happen when we just need each other most?

We gave the Buick a try and it started perfectly, so Josh disconnected the cars and we loaded back up for our friend's house.  But we made sure we put the jumper cables in a good spot, where they could be easily found next time.

Because if we don't need them soon, someone else eventually will.