Ripping it to Shreds 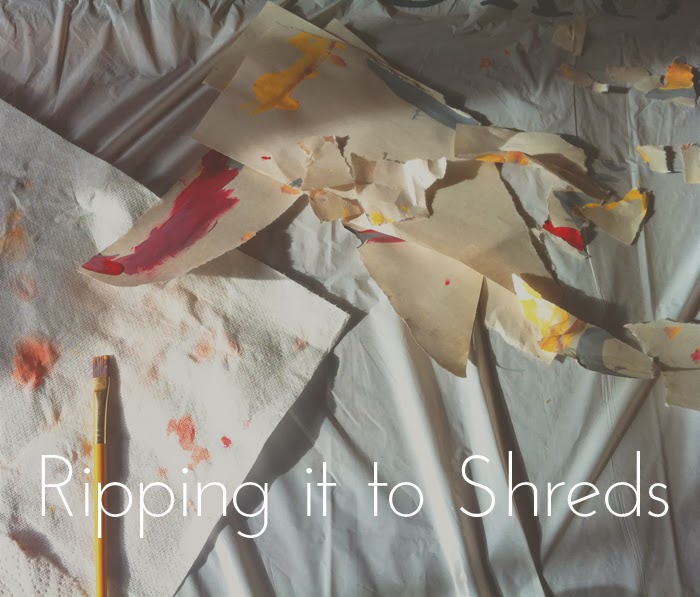 I’ve given up on blogging multiple times over the past few months.

Some of it was just not knowing how to write without talking about my pregnancy, some of it was the odd emotional funk that has come between me and putting my feelings on the page, and some of it is just an overly dramatic, Ecclesiastes-style, everything-is-meaningless lament that makes me doubt the value of working hard to succeed at something as silly sounding as “blogging.”

But the truth is, I also love it.  I love sharing my story and adore learning yours- and realizing how alike we all really are. I love it when I dump out thoughts and feelings and words and then am occasionally amazed at how those words mattered to someone in a real way. And I’m realizing that I also kind of need it. I need to let my imagination and restless spirit have a way to be drawn out into words, to take shape into ideas. I thought I wasn’t writing because I wasn’t growing, but maybe I also wasn’t growing because I wasn’t writing?

In any case, I read this timely article about writing as a spiritual discipline and decided it was time I tried it as such.  Instead of waiting for a well-formed concept to post, something “worthy” of blogging, I’d just commit myself to putting pen to paper and writing down (and scarier- sharing!) whatever it was that came out of my heart.

So this morning, I got ready for the “new era” of Bare Tribe...the comfortable, vulnerable, unplanned honesty of whatever that was going to look like. I warmed up some leftover quiche and a cup of tea for me, set out a table full of paper and paint and M&Ms for Annika. (Okay, the M&Ms were for me, too.) 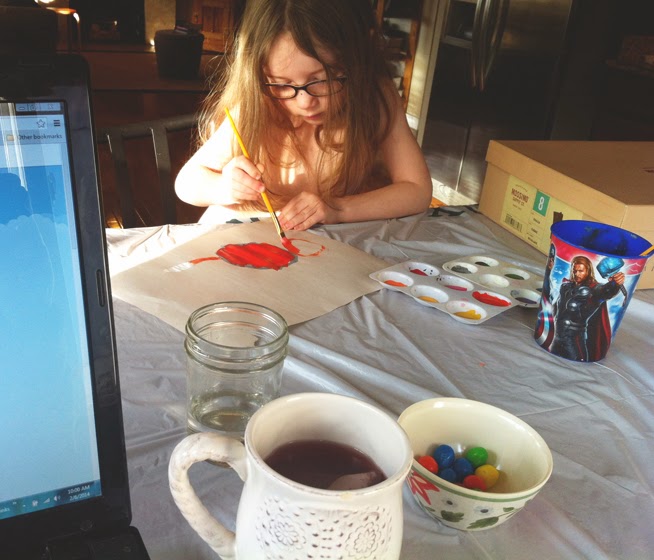 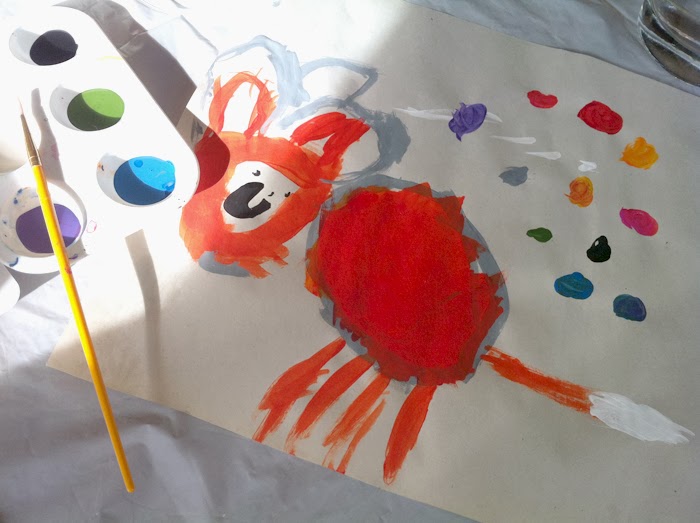 I responded to some emails while she painted a perfectly adorable picture of our dog Banjo (to be hung next weekend at his 1 year birthday party that she is planning), and then I suggested that she do a Valentine’s-themed painting with red and pink hearts.

I had barely written a few words when I heard her growling.  Growling is a lovely little thing she does when she feels frustrated or uncomfortable and doesn’t know what to say. I mostly try to ignore it and wait to see if she can find the words to express herself better (—unless she does it in response to a sweet stranger saying “hello” and then I just laugh awkwardly and rush away to attempt another discussion about the difference between shyness and rudeness). But now, instead of finding the words, she got increasingly frustrated at her imperfect attempts at drawing hearts and began to rip her painting into shreds.

I was thinking about the mess—the paper everywhere, the wet paint, the water she almost knocked over—and started to raise my voice. We have a no tolerance policy for tantrums around here and she knows that.  But I hesitated, told her to go take a time-out in her room and calm down, and that I’d be there in a minute to talk about what just happened.

When I did go in there, she was sitting in bed with a stack of Little Miss books, just quietly turning pages. I moved the books out of the way and crawled under the covers of her junior-sized IKEA bed, wrapped my arms around her and tried to think of what to say.

But I flat-out didn’t know what to say.  I could sense the weight of a bigger issue, the spiritual significance of the moment even, but I didn’t feel equipped to guide her through it at all.

So I just squeezed her close and got started as honestly as I could:

I waited. She said nothing. So I went on.

I could just tell you that it’s not okay to rip up your paper. I could tell you not to act crazy when you feel mad. I could make those rules and I think you would obey the rules, but… it wouldn’t fix the frustrated feeling in your heart.  Jesus tells us that we can act good and follow rules but still have ugly hearts, and he cares the most about what’s going on inside our hearts.

I asked her if she had fun painting Banjo, and she said yes.

Did you decide it was fun after it was finished and I told you how good it was? Or did you know it was fun while you were painting it?

She knew it was fun the whole time.

Good! Because it should be fun the whole time! Painting isn’t just about drawing a perfect picture; it’s about making art, something that makes you happy. You may feel like you can’t be happy doing it unless it’s perfect, and that you have to feel bad or give up if it’s not good enough, but that’s not true.  The devil wants you to believe those lies, he likes it when you are frustrated and sad, but God says you are free to enjoy painting-- and free to feel happy with your paintings because they were fun to make.

And then, there was another one of those “clicking” moments where I realized my daughter and I are so much alike: I have been getting frustrated with writing, with blogging, with sharing-- and just walking away from it.  It may not have been full-blown, ripping-it-to-shreds yet but there was definite “growling of the heart” going on.

I could so plainly see Annika’s error in letting her creativity and expression and joy be strangled out by the desire to succeed, the longing for control, and the need for something to live up to her own expectations. It hadn’t been so easy to see in myself.

Basically, at five years old, she was already believing that nagging, lying feeling that said her current struggle determined her future capacity.  It was the same lie that has been hovering over me for months, that I should only care and invest myself in something that was somehow useful and productive now, instead of feeling free to find joy in a process that has always been joyful to me.

She interrupted my thoughts. I was in such a cloud of sentiment, and I waited for her comment to be the perfect, meaningful conclusion to my thought process.

Mommy, if we took Bug’s fluffy legs and Marilyn’s feathery cheeks and Lucy’s bright red comb, and put them all together… would that be like… Super Chicken?

It wasn’t exactly the perfect, final thing to wrap up the whole story in a meaningful way. But it made us both laugh. And she decided that she wanted to keep painting.

So we came back into the kitchen together and set ourselves to the task of expressing our thoughts and ideas together in an unplanned, imperfect, totally real way with no expectations. 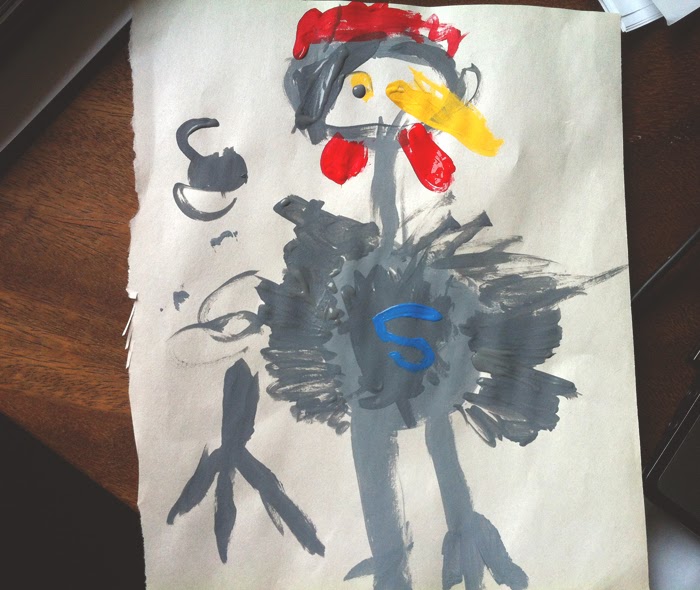