It's nice to take a long road trip and never leave Arkansas! On Saturday morning, Annika and I hit the road first thing in the morning and headed to our friend Audrey's 2nd birthday party in Little Rock (Audrey is my friend's little girl, just a week younger than Annika.)  She was adorable all dressed up in costume for her themed Minnie Mouse party.  And Lisa was totally sweet to have some birthday presents for Annika to open, too!

From the party, we left and headed straight to Arkadelphia.  Luckily, I still haven't lost all connections there!  I've got a handful of friends that live there and stayed with a girlfriend from my college social club, Chi Rho Phi.  We rested a bit at Trey and Carrissa's place, got to visit with Katie and Eric, and then took a deep breath and loaded up to go see the kids.  (If you know me well, you already know about "the kids", but I'm referring to the families that we came to love 7 years ago through Backyard Bible Clubs in college.)

Its always wonderful chaos when we see the kids... loud, screaming, laughing, fighting, dancing, playing, hugging, pushing, loving chaos.  I've come to love these kids and these times so much.  Its like the whole world exists only right then and there with them on a dirty playground, and I'm so happy for their sweet hugs that I don't even notice the sticky candy stuck in my hair.

Annika is a little less in love with the chaos and usually clings to me permanently for the first hour or so.  Its hard for her to get adjusted because, as soon as she relaxes and starts to play along, the kids want to scoop her up and carry her around with them, which only sends her running back to me.  But slowly, especially now that she's a bit older, she realizes that they're friendly and also gets some courage to shake her little finger at them and say, "no, tony, don't push me!" (this was on the swingset, and it quickly turned into "thats fun, tony!").


We spent most of that afternoon playing at the apartments with the younger kids, and my heart almost broke when the moms told me that the older kids were all at camp for the weekend.  Luckily, after the initial shock, I realized that they'd be back before I left town.  It was probably good to see the babies (not such babies now) first and focus more on the big kids the next day.  We played until sun down, or maybe just until the dum-dums were gone, and promised to return for a meal the next day.

Annika and I woke up early on Sunday morning and I treated her to waffles and cheese grits at Waffle House.  As always, she was the star of the show in there and the waitresses found her a Waffle House hat. 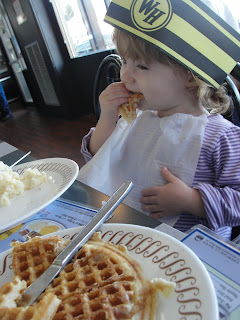 Once our bellies were full, we headed back to the apartments to wait for the big kids to come home.  Only Mehkia did, so she and I spent the afternoon together at Carrissa's watching Sonny with a Chance and Justin Bieber videos on youtube while Annika napped.  And when she woke, we hit the road again in search of the others.  After knocking on a few doors, we found that September was in Little Rock so we switched targets to Jathan.  We had been told he was at a friend's house, but that friend's house said he was at another friend's house who said he was at another friend's house who said he had gone back to the first friend's house.  (This boy gets around town.)  I had shown Kia the bed intruder song, so we drove all around singing "we gon' fiiiiind you, we gon' fiiiiiind you".  We finally found him and his buddies walking around town and I honked, waiting as always to see how his reaction had changed.  (I've had to adjust over the years to the more teenage, less screaming-and-jumping-into-my-arms response.)  But he was still proud to tell his friends that I was his big sister and to introduce Annika as his niece, so that was enough :).  We sat around downtown until his friends got impatient and finally left, and I persuaded Jathan to leave his friends and come home with us for Grandma Sheena's dinner.  (the two that have done Bible Clubs since they were boys wanted to stay and hang around after the others left, which was sweet.)

After Annika and I had beans and cornbread with the kids and spinach tortellini with Trey and Carrissa, my friend Daniel from Bible Clubs invited us over for a chicken dinner.  We passed on another meal, but met up with him and his friends after they ate.  Annika loves "mister danul" and warmed up to him pretty quick, and I think he took a shining to her as well ;)  She was actually content to leave my side and let him carry her all around the house.  Daniel is starting a bakery called Mr. Graham's Bread, and Annika got to dress up in some official "gear".

This was a great ending to a pretty long day for Annika, she got a lot of special attention from a distance at first and then, as she got more comfortable, played around some with Daniel's friends.  (Can you do the awkward turkey? Because Annika can.)

Monday was our last day, but I couldn't leave without seeing the big kids one last time.  We packed up our things, said our goodbyes to the wonderful Cooks and their puppy Chadley (Annika loved this dog).
And then, on our way out of town, we stopped at the middle school to have lunch with Jathan and Kia.  It was cute how different each one was... Jathan didn't even go through the lunch line, he took us to our own private table where he ate my Subway sandwich and played peek-a-boo with Annika and gave her a dollar... Kia carried her "niece" around and introduced her to little girls and teachers before we sat at the table with her friends and shared her packed lunch of pickles and cookies.  I loved how she didn't feel the need to explain when her coaches asked, "so this is your.... niece?" She'd say, "Yep!" and they'd look at me... and I'd just smile. 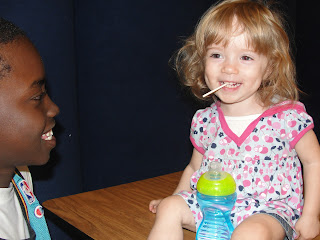 Kia and I stayed in the cafeteria until we were the only ones left and the women were trying to wipe down the tables, then we finally said goodbye with lots of hugs and kisses.  I wish I could make guarantees about when I'll see them again, but it always has to be "I'll see you as soon as I can!" but I think they know that I mean it.

As soon as we hit the highway headed back to Fayetteville, Annika passed out.  She was a happy girl, I think.  Full of dum-dums, cookies, spicy cheetos and probably some of Chadley's dog food... but happy.  I hope she's old enough to remember all that lovin' for the next time around! 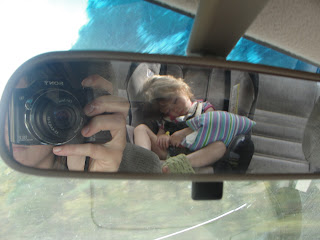