Our Jesse Tree, and Other Lessons 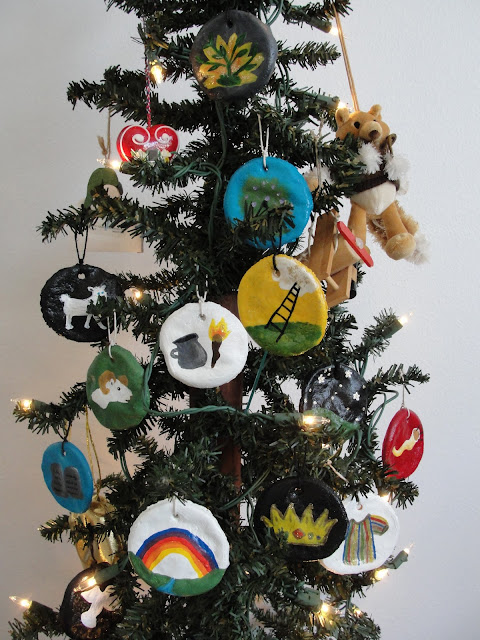 I just wanted to take a minute to share about how great the new Jesse tree tradition has been, especially because I've told several stories in ways that good mommy/daddy friends have shared with me.  We try to do one ornament every night before bedtime... we get out her children's Bible (which is very close to scripture and has awesome pictures ) 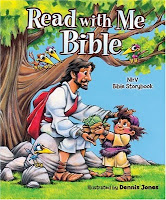 and find whatever story we're on for the night.  I do a quick review of one or two ornaments from the previous nights and then we read our story and talk about how the ornament is a good symbol for that story.  Most nights I have felt like she is hardly catching on at all, but I've recently been realizing how much she is actually paying attention, and its amazing!

For example, the first story is about the creation and Holy Spirit, and we closed our eyes to imagine how dark everything was.  Still, when she points out that ornment, she closes her eyes and talks about darkness without me saying a word.

Her favorite story and ornament is Noah's flood, which truthfully is an odd story for kids to love, but understandable because of all the animals and the rainbow at the end.  But, I have thought before how peculiar it is to turn such a catastrophic incident into a happy fun little tale, and had a conversation with my friend Omar about it not too long ago.  He shared about how he included the judgement aspect of the flood in his telling of the story to preschoolers, and didn't shy away from the fact that God was purposefully wiping out the entire population.  He talked with them about sin, and how the people on earth had forgotten God and disobeyed him, and their hearts were dirty.  He said God saw all the dirty sin and was sad, and he wanted to wash the entire world to be clean again.  But because Noah loved God, his heart was clean and God allowed him to remain on the earth.  (Hope I basically got that right, Omar.)

Anyways, she was following pretty well, but the seriousness of the story was still totally overshadowed by the rainbow ornament.  And yet recently, at least a week after the Noah story, she was "reading" her Bible and came to Noah.  She started saying, completely to herself, about how the story of the flood was a story about God was washing the earth clean.  I was so glad she remembered the story and that it sunk in a little deeper than just "rainbow" or "elephants! two of 'dem!"

My favorite story is the blessing of Abraham because its so huge in the overall story of the kingdom, and I wanted it to be special for her.  We talked about the stars, and how God promised that Abraham would have families "as many as the stars." I realized that its a hard story to teach without knowing what "blessing" is, so I'm trying to use the word more now and reteach that one a lot.  But, when I was listening to her playing with the ornaments (she often plays dumb when I ask her questions about things, but its when I catch her talking and playing to her herself that I realize how much she actually knows) she was saying "soooo many families.  Nonas and Grammies and Daddies and Mommys and Annikas.  I be with you.  Bless your family. Soooo many families."

I was amazed!! I ran over with chocolate chips and told her how proud I was that she was listening to our story time and learning.  I still want to focus more on the "blessed to be a blessing" part of that story, but I think we'll just keep going back to it... especially because its an important thing to understand once we get into the New Testament.

But even with all the good trees in the garden, Adam and Eve chose to eat from the one tree that God had said "no" to.  And of course that story goes on a bit, but just yesterday she was flipping through her Bible again and I saw her re-telling the finger story to herself.  "Dis one, dis one, dis one, but nooooot dis one." And so I went over to her and asked if Adam and Eve had obeyed God, and what happened when they disobeyed.  We talked about how they left the garden and they were so sad, but then she happily pointed to the rainbow ornament and said something that I couldn't figure out.  But, I mean, I'm sure it was something about the theological signifance of redemption and blessing.   ;)

Anyways, I'm so thankful that her little brain has such an amazing capacity to remember things.  And I'm so thankful to have wise parents in my life that are contributing to her training and teaching in ways they didn't even realize!  There are so many other stories and ways that I have been blessed by friends and family.

Annika is truly being raised by the wisdom and prayers of our "village."
Labels: Annika family Home and Family spiritual growth