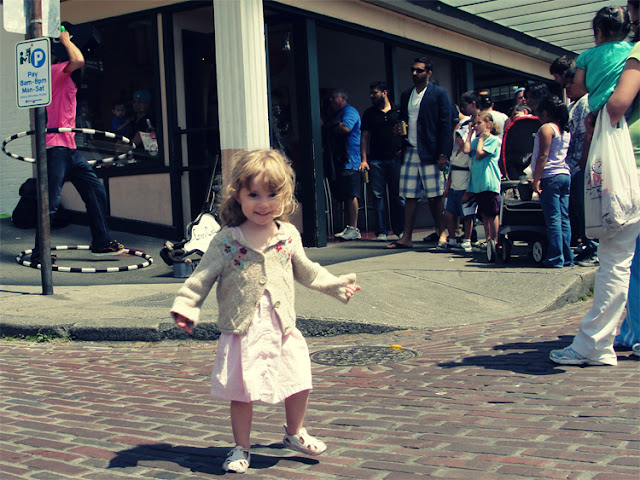 I love the city.  I love the vibrancy and energy of a thriving, changing, modern community of people.  I love the visible signs of progress and culture.  I love the passionate expressions of personality on every corner.  I even love that industrialized smell of sweat and smoke, pavement and plastic.  Cell phones ringing, buses rumbling, feet shuffling, music humming.  I can definitely feel a part of myself connecting with a life so distinctly... well, so distinctly human.

But, I've never felt at home in the city.  In the book I finished recently about pioneer life in the Ozarks, one of the sage, old, country men mentioned how people in the city are missing a certain "realness of life" because they are completely surrounded by only the works of man's hand and so distant from the works of God's hands.  At the time, I thought it over and whole-heartedly agreed.  It confirmed my deep desire to be near nature in is purest, untouched forms.

But as I walk the streets here, I realize how misled the statement really is.  It is here, in the city, where I am surrounded by the masterpiece of God's creation - humanity.  He said his wordly creation was "good", but he said man was "very good."  It is man that has been made in the very image of God, and Jesus says we are of infinitely more value to him than birds and flowers.  I guess you could say that the earth may be the work of God's hand, but man is the work of his heart.

And its this truth that completely overwhelms me here.  You see, in Arkansas, I have been almost training myself to shake off the old habits of isolation.  Or, I suppose I could more truthfully say that I am "being trained," because its really something that has just happened rather than something I have sought after.  Thought upon thought, incident upon incident... there is being built a realization of how critical it is that Christians be real in this world.  And by "real" I simply mean like Christ.

I've written on here before about how people are put off by Christianity and yet were so drawn to Christ himself.  And its not because he preached a happy little gospel of tolerance and neutrality! No, he got himself killed for claiming to be the Son of God and for so zealously calling out sin and pointing to the Father.  But he loved people.  To the point of dying for them, he loved people.

So, I've been slowly learning how to step outside of myself and notice the world these days.  How to look someone in the eye, to listen to what to they say, to be present and aware among people instead of always consumed with a phone/ipod/distraction/whatever.  But, that was Fayetteville, and I've come to find that a big city like Seattle is a whole 'nother animal.

I'm not just having the occasional personal connection at the grocery store or library and then going home to make bread and butter.  Even "home" here is a big hotel full of other occupants and staff.   And of course, when you pay enough attention, every face is a story and a question.  I notice the fidgety movements of the nervous new guy at the front desk, I see the downcast eyes of the women in abayas that refill the coffee pot, I listen unsuccessfully to the fast-talking African man who drives me to the bus stop each morning.  And when I finally get downtown, I cannot walk the streets or ride the bus or even pass a stranger without a slight twinge in my stomach.

The heartbeat of the city is the unavoidable human condition...theres joy and passion everywhere, but mingled up with a bitterness and brokenness that goes unsaid.  I often catch the expression of an older man or woman as they watch Annika, a slight smile but obvious sad eyes, and I wonder whats happened over the years with their own children.  Or sitting on the bus, I'll try to smile encouragingly at the man with trashbags under his feet, trying to explain to me, for whatever reason, how he had bread in his pocket simply because he forgot he put it there, and "not because he found it in the trash."

Its clear that the game-plan for most around here is good defense.  They look straight ahead on the road, they stare out the window on the train, they wear earplugs and pretend not to hear the homeless man's ramblings. There are some parts of the city that you go to take pictures, and there are other parts that you just endure until you get to your next destination.  I'm not really sure what I'm supposed to do.


I'm not going to go sit in an alley with my toddler and strike up conversation with the men huddled under a sleeping bag.  I'm not going to get off the bus at the rough-looking neighborhood with a gigantic, painted Buddha in the courtyard and go knocking on doors.  But I'm also not going to keep Annika from high-fiving the homeless guy on the bus who just wants to feel normal and I'm not going to stop smiling like an idiot at the rude guy who doesn't like my stroller on the sidewalk.

Luke 19 tells the story of when Jesus entered Jerusalem in the very manner that prophecy had spoken of it, and the crowds erupted in praise and adoration as he was ushered into the city in a red-carpet fashion. And yet, even as they were singing "peace" and "glory", Jesus looked over the city and wept for it.  He wept because their joy was empty and that the real truth was "hidden from their eyes." He knew that the future held for them only more brokenness.  He even prophecys the eventual destruction of the temple.

When I sense brokenness, I see the sad eyes or hear the hopeless ramblings.  But when Jesus sensed brokenness, he was looking into human hearts and into their futures.  It was a level of connection with people and with the city that I cannot even begin to understand.  But he loved them deeply enough that, despite his hard and politically explosive teachings, they still just wanted to be near him.

If only Christians, if only the Church, if only I could be more like Christ... we might begin to see what "you are the light of the world" can really mean.

You are the light of the world. A city set on a hill cannot be hidden. Nor do people light a lamp and put it under a basket, but on a stand, and it gives light to all in the house. In the same way, let your light shine before others, so that they may see your good works and give glory to your Father who is in heaven.
Mt. 5:14-15
Labels: Jesus miscarriage personal stories spiritual growth the city