On Saturday, while Annika napped, I was potting a mum on the back porch.  (Or the front porch, depending on how you look at our house.)  I heard a rustle in the leaves and glanced up, expecting to see the neighbor's orange tabby spying on me again, but saw instead a shell moving slowly up the incline.  I froze.  I wanted to watch him for a moment before frightening him back into his shell, but he was moving so fast (for a turtle) and almost escaping into the bushes.

I rushed over to grab him because I wanted to keep him until Annika woke up, but the booger practically scurried away into hiding.  It was no small effort to catch him, I was afraid he was a snapping turtle and he was...well, not afraid of anything.  Not once did he hide in his shell!  I picked him up using my sweater and built a small confinement for him until Annika woke up from her nap.

When she did finally wake, I told her there was a surprise outside and introduced her to her very first turtle. 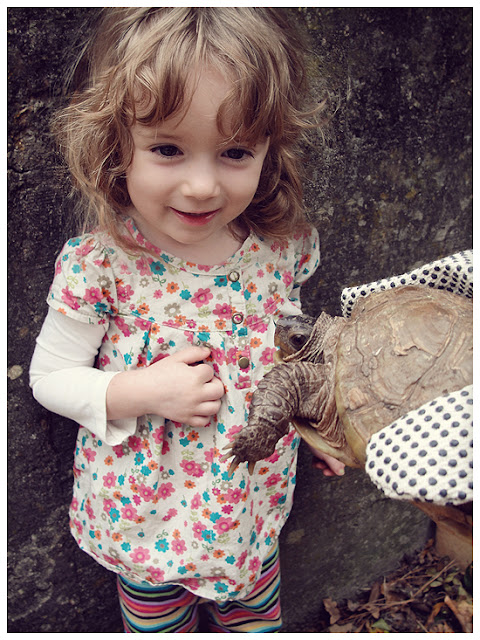 I figured he probably strayed to our house from the pond across the street, so we put him in a box and tried to take him home. 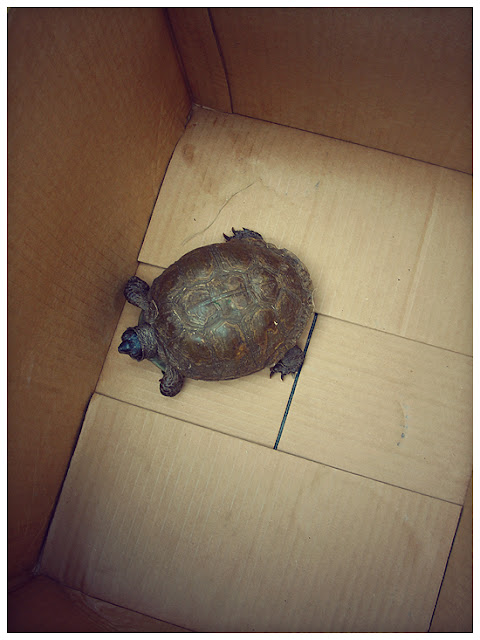 At the pond, I carried him down below the rocks and put him just near the water.  I felt sure he would rush into the water and swim away.  But, no, he stretched his neck out and just stayed there for a weird while. 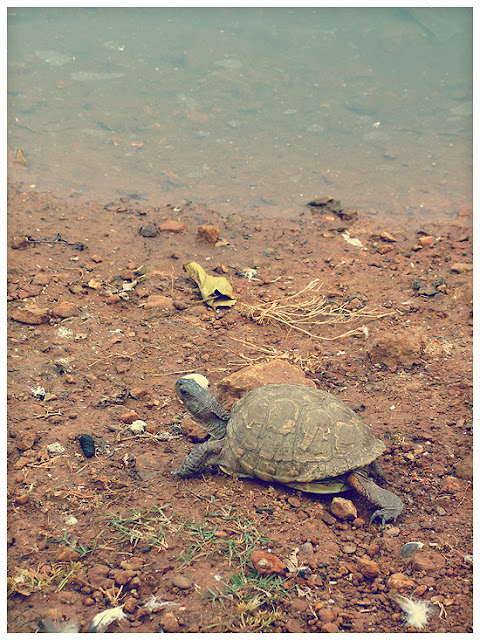 Finally, he started walking around.  But instead of going into the water, he turned and came back toward us.  He paused at the rock incline and looked up at us and I thought, "Ohh, how sweet!  He must want to give us a lil 'thank you' turtle smile before he goes." 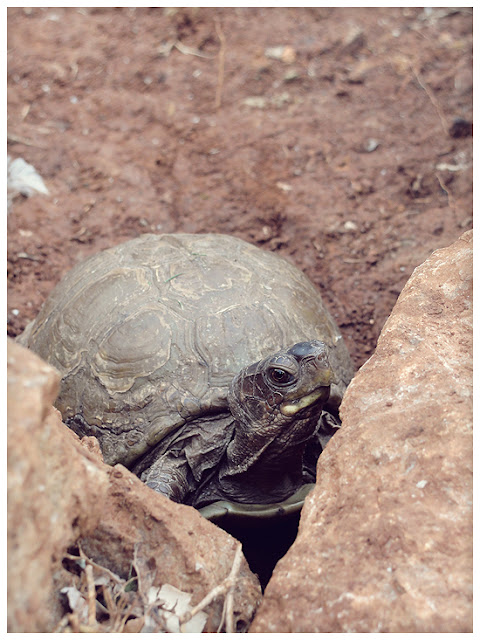 (Look at that crooked grin! Bet you didn't know turtles could be so adorable, right?) But, I was wrong about him again.  He actually scrambled and scratched at the rocks, trying to crawl back up into the grass.  So, I finally reached down, picked him up, and put him beside us in the grass.  He immediately took off in the other direction. 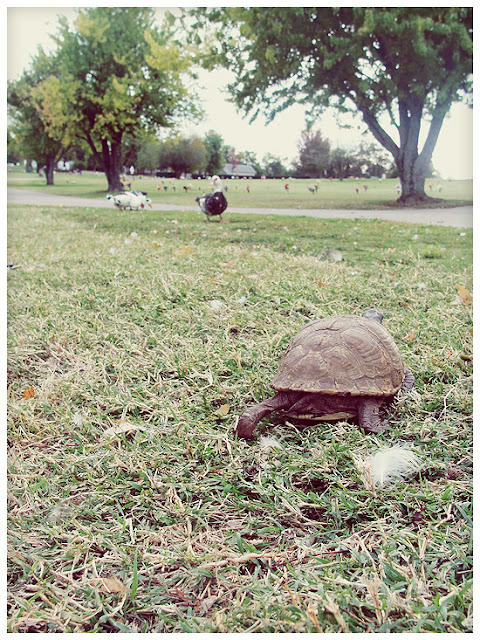 Have you ever watched a turtle walk away?  It's actually pretty funny. 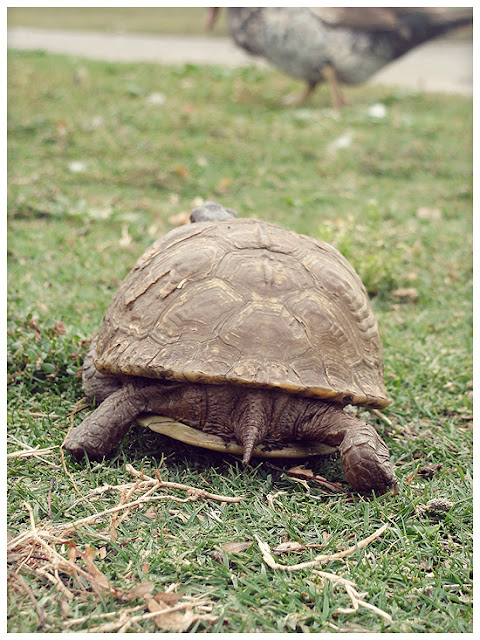 Everyone was curious enough to watch. 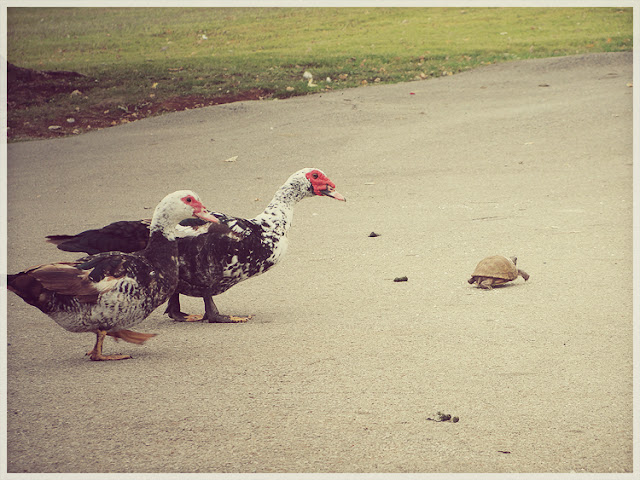 Some turtles just have places to go, I guess. 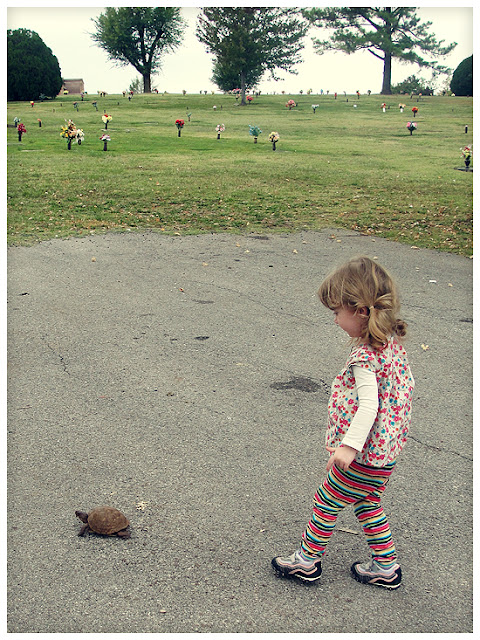 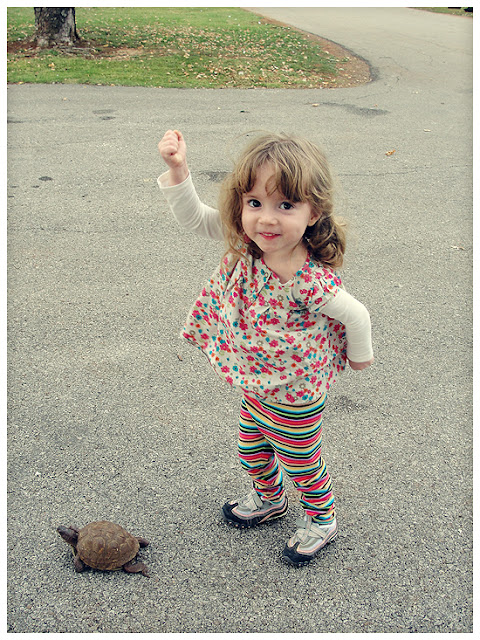 He kept slowly heading up into the cemetery even as we drove away.  I sure hope he got where he wanted to go.