As if American politics weren't enough, right?  But social hierarchy extends even to the most obscure of places... like your neighborhood duck pond.

Annika and I have been trying to get outdoors lately whenever the weather is nice, so today I promised her we'd take the last chunk of bread and visit the ducks on our way home from the library.

When we first moved in, there were little Canadian Goose babies (geeselings?) and two protective parents that terrorized any of the other geese that came near.  Understandable, I guess, but sometimes these geese are just plain mean with no reason.  They hiss, they flap, they chase and they bite.  They haven't done more than hiss at us, and I can't help but fuss at them like they're nothing but sassy, misbehaving children.

It's only the Canadian Geese that have so much attitude, and some of them even have injured wings from what is probably civil wars among the flocks. The big white geese, however, have been our friendly favorites.  Not quite as amiable as the little ducks, but they usually aren't scared to come near us and they never steal bread from any of the others.

Today, though, Big White Goose was laying down the law.  He must have been elected Master Protector since the last time we saw him.  I saw him threaten the mean geese, punish them for behaving badly, then waddle around in circles honking his dominance.  And maybe I was imagining things, but I'm pretty sure the rest of them shrunk back in respect.  (Especially Miss Big White Goose.)  He is obviously the big boss now, and I think his motives are good.

I hope you enjoy these behind-the-scenes glimpses of our local pond society. 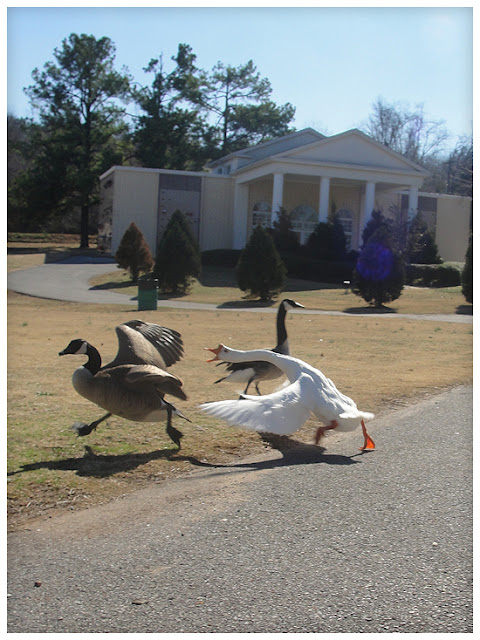