It's been cold outside... and not just a winter chill but wet, gray, and yuck.  That fact combined with this week's busy start caused me to wake up on Thursday and say to myself and everyone else, "I'm not going anywhere today."  To which Annika responded through giggles, "Are we gonna have a lazzzzzzzy day?"

I regret calling these kind of days "lazy days."  I should have had the foresight to name them "Home Production Days" or "Cerebral Stimulation Days," but they just don't quite have the same ring to them, do they?  And anyways, for Annika, indoor days like that really just mean wearing pajamas, indulging in books and movies, and getting treated to hot chocolate... so I guess she has plenty of reason to get giggly about it!  And to be completely honest, I get a little giggly about staying home all day in my pajamas, too.  Even the cleaning and baking are kinda fun for me, but maybe that's getting a little too honest.

So, Annika's first request yesterday morning was the hot chocolate.  But lately I have been trying to cut back on how much refined, white sugar we eat, so I thought maybe I'd get creative. After all, reading through a stack of library books just isn't the same without a sippy of hot chocolate!

Instead of boiling sugar and cocoa together, I mixed the cocoa with a little water and honey and warmed it slowly on the stove top before adding some milk.  I kept it on low so as not to over-heat the honey and it was delicious.  I'd say even better than the regular sugar kind, it's worth a try!

Later in the day, Annika's friend Hadley came over to play.  Annika was still napping when she arrived, and I let Hadley have the honor of waking her up. I wish I had taken a video.  Hadley pulled herself up on the bed and straddled Annika (sippy cup still in tow) and pressed her nose up against Annika's.  "Wake up?" "Wake up?" :) They are so adorable.

Angela (Hadley's mom) and I laugh about how much they act like sisters because they often get irritated with one another and yet love each other so much.  Just like a little sister, Hadley got a new doll recently that looks identical to Annika's Isa doll, so she has named her doll Isa, as well.  And just like a big sister, Annika feels the constant need to teach Hadley how to do things right and correct her when she does things her own way.
One conversation I overheard while making dinner went like this:

(Annika runs to go get her Narnia picture book)
A: Look, look, Hadley.  This is Narnia.
(Hadley looks at the lion in the Narnia book.)
H: It's Simba!

Fortunately, Yo Gabba Gabba is something they can always agree on. 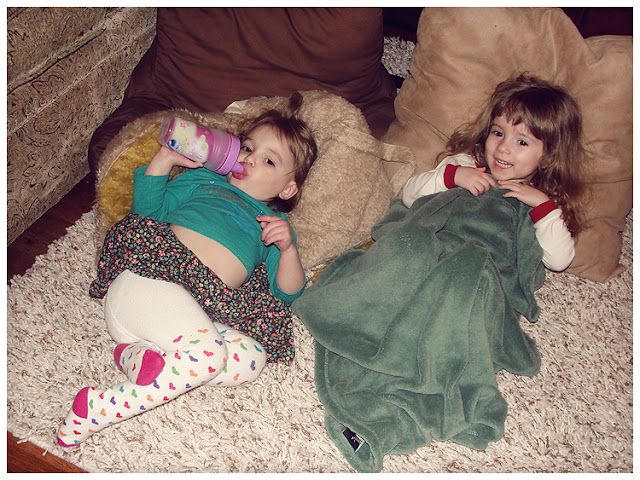 For dinner that night, I had planned to try a new recipe that I found online.  I've been trying to cut back on meat and do more things with peas and beans, so I wanted to give these chickpea patties a shot.  I had tried making chickpea patties once before and it was pretty awful due to bad planning and a bad recipe, but these were good.  I would say "awesome" (I really would, they were crispy and flavorful), my husband would probably say "not bad, actually" and Annika might say, "They almost made me throw up, but I didn't."

I believe their tastebuds are just taking time to evolve to a more sophisticated palette :) 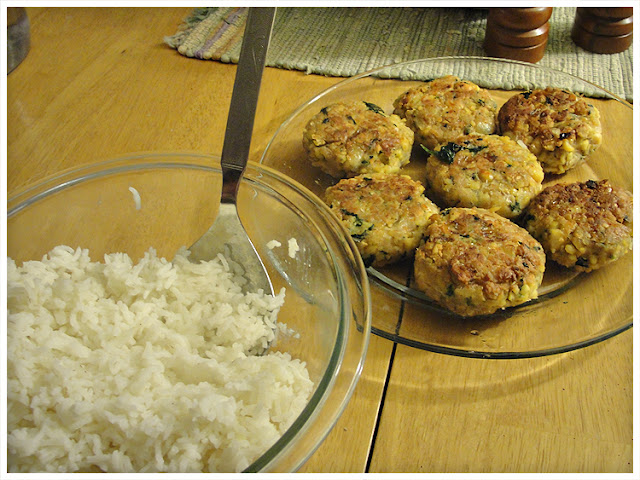 It honestly is a challenge.  Not only are we cutting back on meat, but we're starting to realize that my husband doesn't tolerate dairy very well. When you're used to meat and cheese meals, switching to dinners that rely mostly on veggies and whole foods is tough.  Getting a man excited about chickpea patties is no easy feat, but we're getting there.  We're all three starting to appreciate new foods and new flavors.  And sometimes, when I'm trying something new that I know is going to get a mixed response, it doesn't hurt to throw in a little sumthin' special at the end of the night.

This was a crowd pleaser all the way around. :)