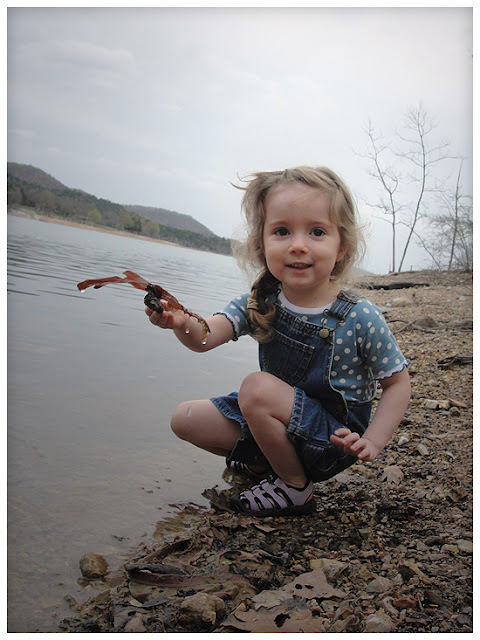 "Water house" was actually what Annika came up with when she was trying to remember the term Lake house. Since we don't actually spend much any time at lake houses, you can imagine how odd the words probably sounded to a three year old.  It didn't strike me as that funny until I started to really think about the mix-up.  I know her limitless imagination and I honestly wonder about the image she had conjured up in her mind of where we were headed.  Maybe a house floating on a lake?  Maybe something under water?  Maybe a house made of water?
In any case, she was excited.  We all were.  I had won the free night's stay during an appreciation banquet for the childcare volunteers at our church last September and we finally (6 months later!)  had a good weekend to "cash in."  Unfortunately, spring break around here was not quite the pleasant, sunshine-filled week we had planned for and the whole experience was odd and sweet and unforgettable.

Our drive up on Sunday evening was beautiful.  We climbed our way through the curvy hillsides just as the sun was setting over peaceful looking farms and small towns and arrived at the lake house right at dusk.  Dusk is actually one of my favorite things... much like dawn, or the beginning of each new season, or any other kind of transitional-type/in-betweeny moment.  And yes, I did say in-betweeny.

I made dinner while Daddy and Annika explored the many levels of house and all it's rooms and then we sat down to enjoy some Margarita Tacos.  Virgin Margarita Tacos, but only because I'm too cheap for tequila.
. 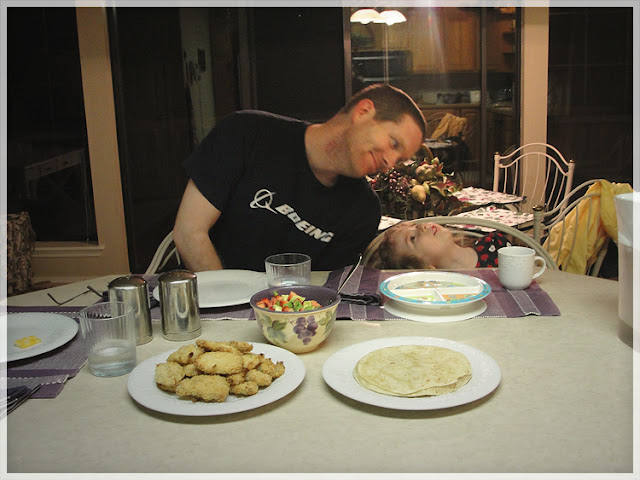 It was around that time that things started to look pretty different than our plans.  Some unwelcome surprises cut our dinner short, our after-dinner walk was cancelled due to rain, Annika's bubble bath in the giant tub was over once we stepped out for a moment and returned to her standing naked in an empty tub, saying, "my water's gone!!" (The drain wouldn't plug properly.)


Hubby and I admitted defeat for the night, put her to bed early and went to sit together on the back porch for a heart-felt conversation.  We sat in silence for a while and listened all those noisy, outdoors sounds that fill the quiet when you're away from the city.  We could see into the windows of a neighboring house and watched a group of young people going wild about what had just happened in the college basketball game they were watching, jumping and hugging and high-fiving each other.

Finally, I opened my mouth and began to speak...let's be honest... complain about everything from our entire week.  But before I got more than five words out, the strangest thing happened.  Somewhere out in the pitch-black darkness right in front of us, a tree fell over.  Have you ever heard a tree fall over?  A huge, ear-splitting crack that rings through the night and the sound of branches tearing at each other on the way down and the thunderous crash as it slams into the ground and then the quiet tremble as everything settles into place and all the little critters run for their lives.  I guess the strangest part was that the whole thing was completely shrouded in darkness even those it was so close to us.

If in that moment my complaining spirit had been a balloon, it popped.  My words just seemed silenced and deflated and I didn't even care to finish my sentence.  My husband actually said, "Thank you, Lord" and we headed inside to go to bed and try again tomorrow.  It was no surprise that Annika refused to sleep alone and we put up no fight as she crawled into the huge bed right between us.  She tossed and kicked for a while and finally my husband prayed over the family bed, that we would all find rest quickly, and I fell asleep before he said Amen.  But... I awoke about an hour later to him hollering and leaping out from under the covers.  Would you believe this?  A wasp had landed on him while he slept and stung him right in between his fingers. He yelled something ridiculous about the bug being a "little devil" and hunted it down and completely pulverized it into the ground and then flushed it down the toilet before going back to sleep. 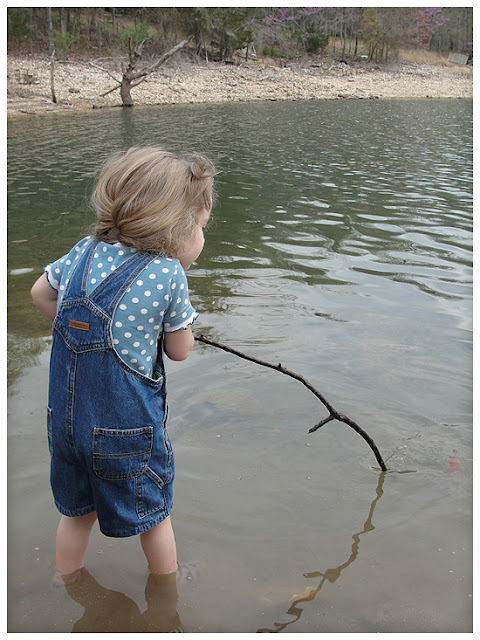 Annika (who barely even rolled over during the wasp incident) woke early the next morning, so she and I ventured out into the new day while poor, swollen-handed Daddy slept in for a little longer. She was undaunted by the chilly air and immediately waded out into the shallow water to fish for the floating leaves and I laughed at how much more adorable things are when done in denim overalls.  (I mean, if you're three years old. It's probably not true for everyone.) After breakfast we all three headed out for a long walk, but quickly realized that a real storm was rolling in so we stuck close to home.


Despite the rain, though, we appreciated the newness of the day and the fact that we had a whole afternoon to spend together in this place so set apart from our normal lives. We played by the water as long as we could before the rain actually started falling, and then rushed back inside. 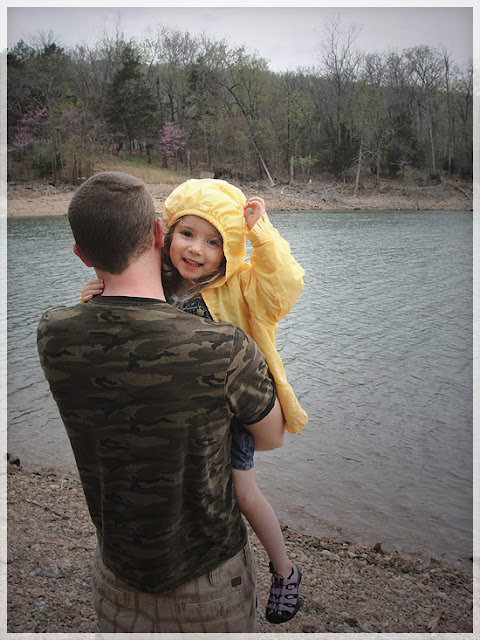 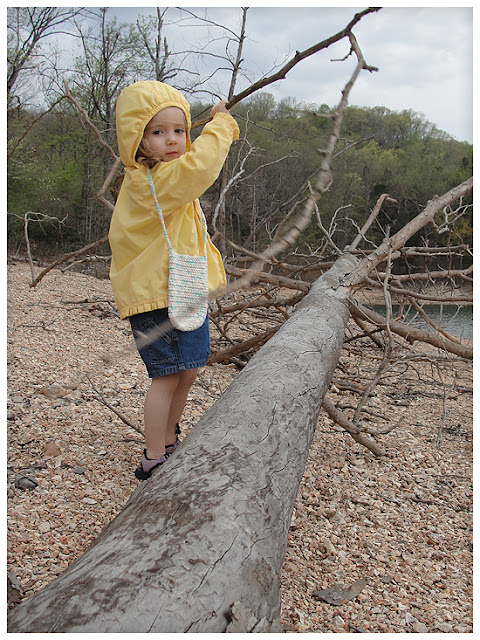 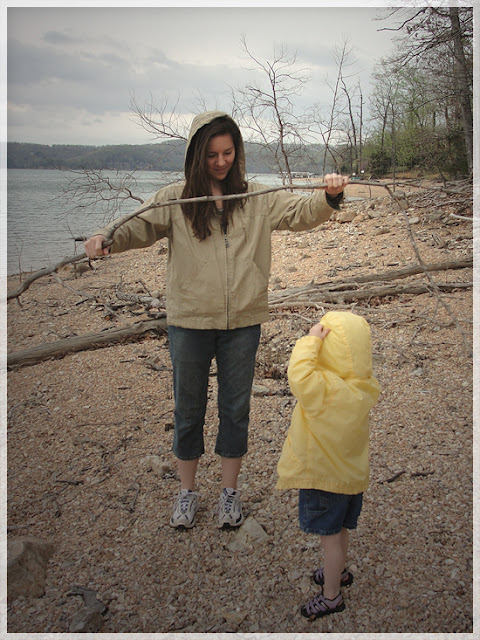 Back inside the lake house, it started to settle in that we really were alone in a cozy house with lots of windows while a storm rolled in over the waters.  No interruptions.  We didn't even have cell phone service.  I rummaged through the kitchen cabinets and found a box of Butterfinger Hot Chocolate with three packets left inside.  Now....Butterfinger Hot Chocolate packets are not something I would ever buy or even allow.  I won't even get started on the list of hydrogenated, artificial crap in those little envelopes.  But, considering the circumstances, something inside me said, "Let's do it." So we did.  We served up three little mugs of steaming, chocolately, crappy, goodness and enjoyed every last sip. 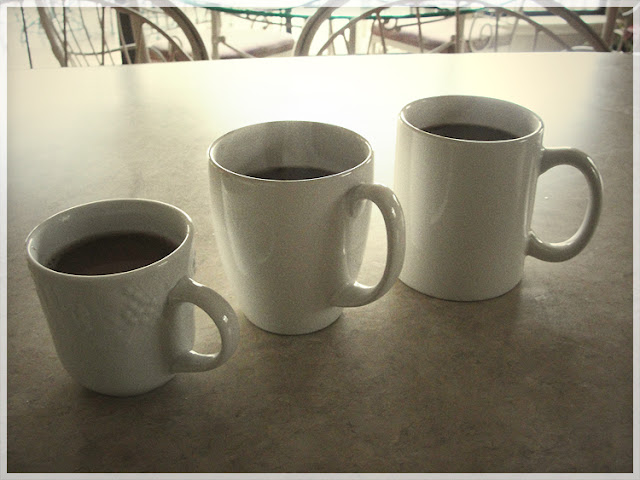 And as we sipped and watched the rain soak everything outside, Annika pulled out her little red book with her little pink pencil and we took turns drawing pictures of what we saw and did outside.  We found an encyclopedia of bird species on the shelf and actually identified some of the interesting birds we'd seen flying circles around the house and talked about what kind of birds we'd want to be.  Then Annika crawled into my lap as I read a few chapters from her current library book, The Borrowers.  Even Daddy cuddled up to hear about Arriety's adventure into "upstairs."    I daydream pretty often about living life 100 years ago, so it really was a nice afternoon filled with no fancy distractions or technology, well....other than the chemically engineered packets of cocoa we drank. 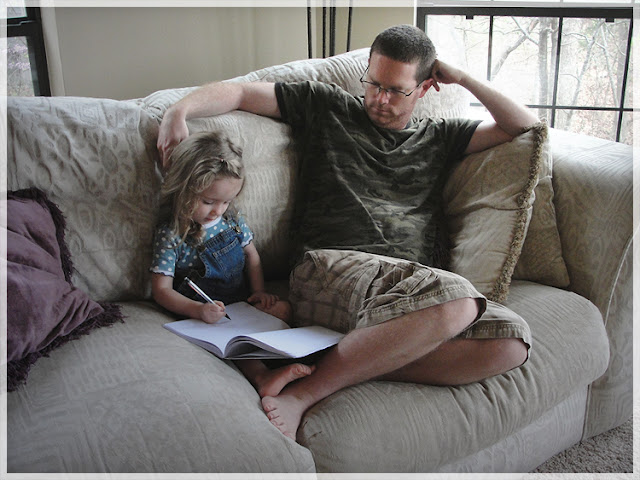 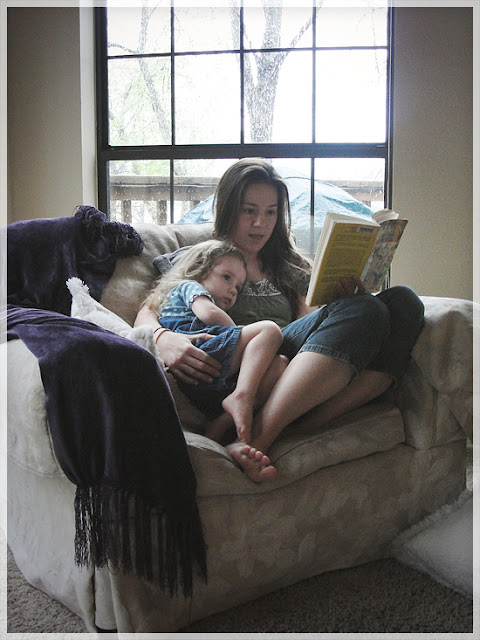 And if that wasn't enough to redeem our bad day, Annika eventually crawled out of my lap and under the blanket with Daddy where she slowly dozed off in his arms.  I snuck upstairs to read my Bible and pray myself back to wholeness on the upstairs porch while the sun peeked out from behind the clouds and the rains blew away. 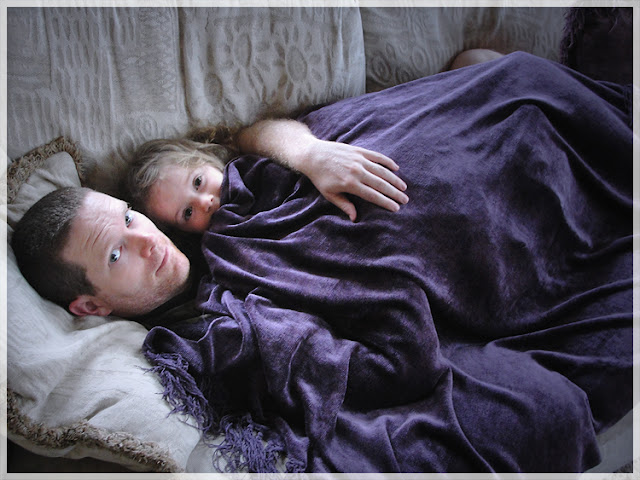 The night before, my complaining words that had popped before they could find their way out of my mouth were going to be something like, "Why would God bring us here, now? If I'm going to have a rough night, I'd at least like to do it in the comfort of my own home." (And if I had known the future I could have added "...where we won't be stung by wasps in the middle of the night!") But that afternoon, as we packed our things and headed home, I felt strangely washed clean.  Not free from troubles, as I would soon find, but just a little more refreshed and whole than I had been before.

I'm glad a tree fell on top of my ugly words.  I'm thankful that a storm forced us to cuddle up together indoors.  I'm still not sure why my husband got stung by a nasty wasp.... but we'll let that one go. ;)
Labels: family personal stories pictures spiritual growth struggles