Just a few more (a “few” like less than 100) miles on I-90 West and we’ll be pulling up to yet another new life experience.


It’s fitting that it’s raining, since Seattle is famous for it’s drizzle and I’m sure many of our evenings will be spent in showers like this.

“Lucky” is on the radio and it also seems fitting.

“Lucky I’m in love with my best friend, lucky to have been where we have been, lucky to be coming home again.”

I wouldn’t call it luck, but I think that’s been our story.  Lots of moves, lots of addresses, lots and lots of change.  It’s the only thing that stays the same for us –change.  But, like I said, it’s our story and I love our story.

This humongous road trip to Washington was pretty intimidating and I responded with my typical response to any big project: a binder.

A binder with tabs.  Tabs for important things.

You can laugh (my friends do) but for real… the binder was awesome.  And many people asked for an update about the schedule I created for Annika’s time.  That, also, was awesome.  I may post something specifically about that later because it was so helpful and I’d definitely recommend a schedule for anyone traveling with little kids.

Day 1 started with an intense 14 hour drive from NWA to Greeley, Colorado. We were so ready for this day to suck but were surprised at how easily and pleasantly it passed.

We got on the road at 5 a.m. and stopped for a long lunch in Kansas before arriving at a friend’s place.  After a long day on the road, there is just nothing like hospitality. Bison spaghetti, a glass of wine, good company, a warm bed.  She even made us coffee and lemon poppy pancakes before getting on the road the next morning!


Day 2 wasn’t quite the distance we covered on Day 1, but still a significant 8 hours in the car.

We ended up in Jackson Hole, Wyoming.  I was curious about Wyoming, it seemed like such a mysterious state, but wasn’t really expecting to love it as much as I did.

“Big Sky” doesn’t do it justice.

I remember being a youngin’ and hearing someone say that the sky was bigger in Wyoming and I really thought she must be an idiot. But I was wrong.  It really is just bigger.

It was getting late as we climbed into the mountains and watched the sunset over snow-capped peaks and evergreen trees.  Just as darkness was about to enfold everything, we saw a female moose (moosette?) grazing near the road and she even hung out while we pulled over and took pictures.

We crashed into our sweet little KOA cabin way past bedtime and full of happiness because there were outlets. (We had expected no electricity!)

We plugged in all our electronics and tucked everyone in and enjoyed a night of all-around recharging.

We woke up in a log cabin with the sound of the Snake River rushing just outside our front door.

“We’re in Wyoming,” we laughed.  Like it was another planet.

We had a goal of no fast food on the whole trip, so we got recommendations for an affordable breakfast in Jackson.  And I don’t claim to be a foodie or know much about dining, but I'm drooling just a little bit thinking about that breakfast.

Part of it was the novelty of the ranchers sitting near us, or the moose head on the wall, or the way the waitress said “you guys” instead of “yall” (I actually giggled) but it felt like the real deal.

Biscuits, gravy, strong coffee, real-looking fat slabs of bacon.  It was awesome.  So awesome that I just spent a paragraph on breakfast in my summary of our day at Yellowstone.

But, yeah, Yellowstone… that was incredible, too.

My main hope for wildlife sightings was bison and we got so close, I could have probably touched his big furry head.  (Okay, I did.  I can't help it! I have a "thing" about getting to touch things with my own hands. I once touched a Picasso. I'm terrible.)

We also saw elk and possibly a wolf but probably just a coyote.  I’ll let Facebook decide that one later.

The scenery was just too much for words.  The best part for me was when I explained to Annika about God’s handiwork.  I told her how he could have made our world gray and boring but instead he purposefully created color and mountains and rivers because he loves us.  She responded with sincere amazement: “He made mountains on purpose?!”

He did, girl.  Totally on purpose.

Day 4 felt like we were gettin’ good at this road-tripping thing.

We woke again at our KOA camp and once again packed our bags, food, and bedding into the trusty Rendezvous before heading back into Yellowstone one last time.

We didn’t see a bear like we had hoped, but I touched a bison again.  So... win.

It didn’t take that long (about 4-5 hours) to get to Missoula, MT and we arrived just in time for dinner at a local shop that makes traditional pastys, which are kind of like pot-pie pastries with savory stuff inside.  They were huge and delicious and we called it a night early so we could have plenty of family/rest time in our 3rd cabin.

By this time, we had decided to let Annika sleep on top of the bunk bed which she called “a climber” because she got to crawl up a ladder to get up there.

She got pretty good at it and we even timed her: floor to bed in 7 seconds flat. 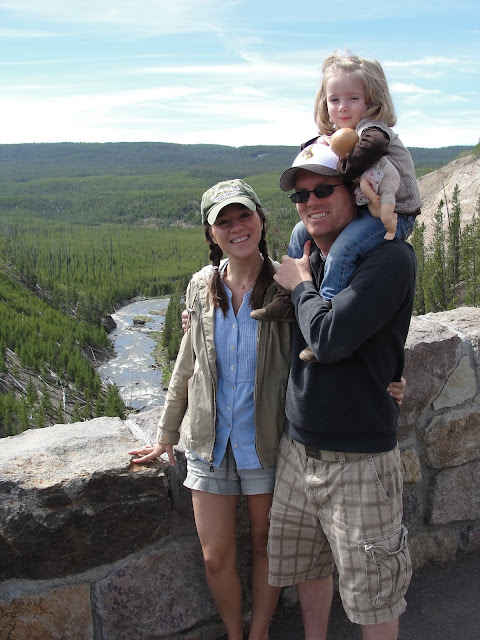 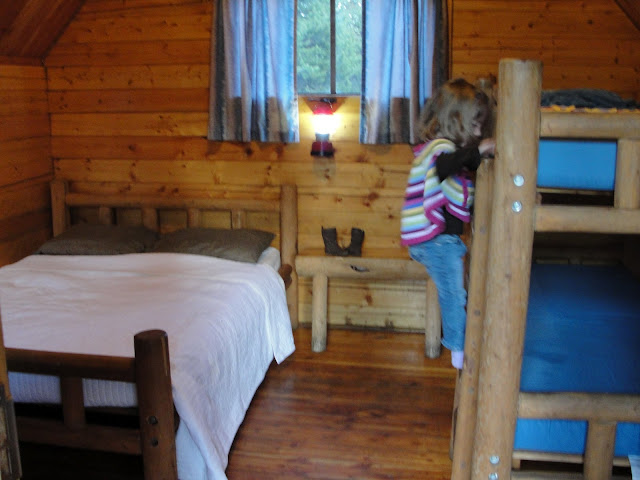 Day 5 (today) was pretty crazy to realize that we’ll be sleeping in our own Seattle studio tonight.

We decided to skip the Missoula Ghost Town visit in favor of a downtown meal and shopping.

My husband and I were both so impressed with Missoula.  Not only is it the location of A River Runs Through It, but it’s got this trendy/outdoorsy/small-town feel that hooked us both.  In my opinion, its Seattle and our Arkansas hometown combined.  The best of both worlds.

It really is nestled in a valley at the foot of snow-capped mountains with a large river going right through the center.  We bought some cool local Montana things and ate a café called Hob Nob.

Daddy got banana bread French toast, Annika got a yogurt and granola parfait, and I got a veggie burrito that was possibly the. best. thing. I’ve ever eaten.

We were all licking our plates...  I’d live in Missoula just for more veggie burritos.

Leaving Missoula put us on the road for one last late evening and here I sit, just hours away, listening to “Buffalo Solider” again (per Annika’s request).

Reggae in the rain.

I haven’t ever referred to this trip as “epic” but it seems like it’s the word that fits these days.

Even strangers we’ve met have used it when we tell them a bit about our journey from Arkansas.

So, dude…it’s been totally epic.

I’m so proud of our little girl for being more pleasant than most adults would have been on such a long drive.  And I’m so thankful for my awesome husband that is my best friend and makes things fun.

And I’m excited about the rest of this summer.  It’s going to be totally epic.
Labels: family personal stories pictures