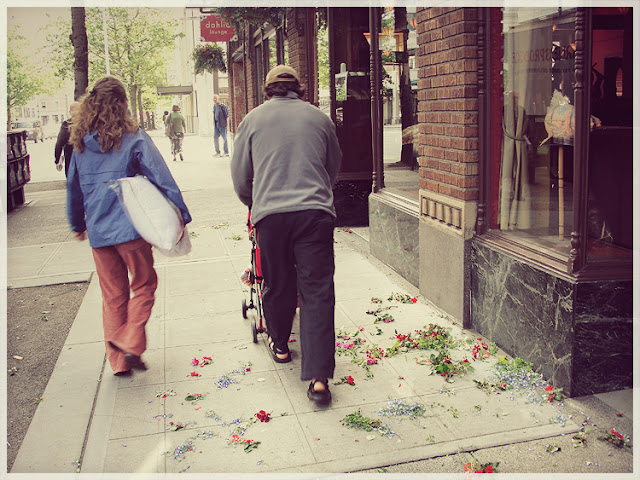 So, Seattle is not so bad.  I'm starting to realize that a lot of the things that feel unpleasant about our "city home" are really not Seattle's fault, its more the fault of what's directly outside our window. I thought about it as I listened in bed last night at 3 a.m.: a parking lot, a bus stop, a 24 hour convenience store, a club's back door, a dark alley, a building under construction, a dog yard, and dumpsters. Even while I was listing it out in my mind, a car alarm went off, the bartender threw beer bottles into the dumpster, and I heard the unmistakable sound of someone peeing on the wall (again).  I laughed out loud and finally closed the windows.

But like I said, Seattle is not so bad.  Having my sis-in-law April and her husband Micah to visit last week really helped me to see the city through more thankful eyes.  There really is just a lot going on here, and that can be cool.  One day, as we laid around our tiny studio with bellies full of delicious Seattle food, April stared almost longingly out the window and said, "I think I'm really going to miss it here.  I'm going to miss all the little surprises, something new around every corner."

And by "surprises", she didn't mean "Watch out, someone is barfing!" (that happened) or "oh, hey! There's another used condom on the sidewalk." She meant the little things in the city that are always changing, always moving, always surprising you.  And she's right; there's so much to appreciate here. There are so many unexpected sights, sounds, and tastes that you don't go a day without experiencing something new.  I loved when we were walking through the trimmings of the bakery's hanging plants and she compared it to the floors of Heaven.  We laughed and kept walking, but I had to take a picture because suddenly it seemed so beautiful.

And even though I've only been here a few weeks, I'm starting to feel familiar with certain parts of life.  The Butcher remembers me by name now because he trusted me to walk away with $30 worth of meat after his credit card machine broke.  The guys at the produce stand don't know my name, but they know my face well enough to say "welcome back," which is kind of cool.  (Makes me feel all local and stuff.)  And I really think that some of the homeless people who have regular corners are starting to recognize me because, on a friend's advice, I've been passing out cheap granola bars instead of change.  There's this one old black man who doesn't hold posters saying he's a retired vet, he just asks for donations for the UNPF.... The United Negro Pizza Fund.  And another old man who camps outside of The Cheesecake Factory and tells jokes for spare change and leftovers.

Sometimes those kind of surprises are more like being shocked with the realities that you just don't see every day when you aren't walking the sidewalks of a major city.  It's hard for me to walk past homeless people, even when I know they might be refusing food and shelter so they can drink on the street.  It's hard to see the brokenness of humanity here.  I have to keep reminding myself of how much God treasures each human soul, despite all the brokenness.  Or maybe more because of it.

I am so thankful that Mars Hill Church exists here in what was once the "least churched city in America."  I am totally thankful for the community group we have started attending and the people we have met that love their city.  I feel like I am leaning what it means to be a missionary... removed from all the romantic idealism of my imagination.  Not that I feel like I'm doing anything significant myself, but I'm learning from watching others that are really stepping up in total bravery and compassion to try to meet the needs of people here.

I want to keep my heart open and available to be part of something huge, even in this short time.  And I'm keeping my eyes open so I don't miss out on the little things. 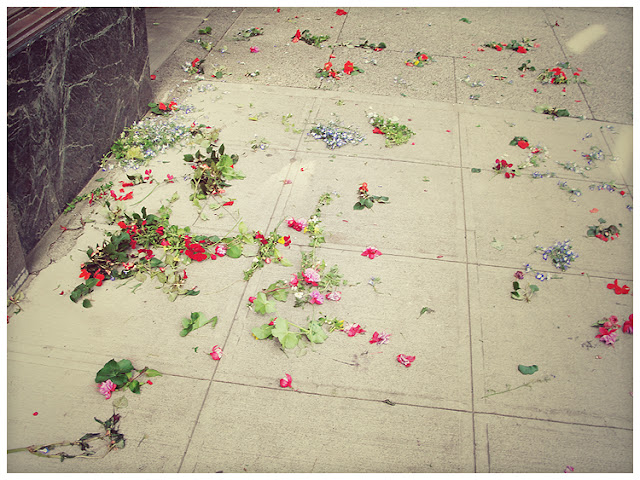