Always Take Candy from a Stranger 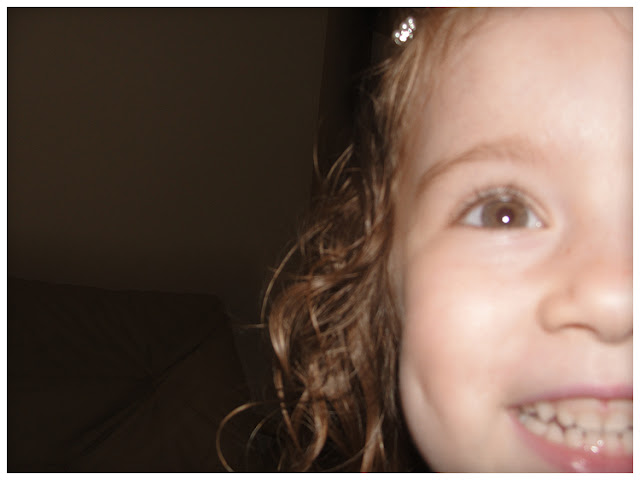 Today has been... surprising.

It started out not-so-hot.  Literally, actually, because Annika and I were both dressed for the sunshine that finally arrived last week but were instead met with a chilly, slightly windy, gray day. We had been dropped off for a doctor's appointment -which sucked- early in the morning and afterwards hurried to a coffee shop near our bus-stop.  (Luckily, in Seattle, if you can't trust the summer sun, you can at least count on the fact that there will always be a coffee shop nearby.)

Afterwards, we took the bus to the market instead of going home.  I'm not sure why, but we could so we did.

It was interesting to walk the street, all cobble-stoney and nostalgic, before the big rush of shoppers arrived.  People unloading trucks, metal gates rolling up as store fronts were opened, good ol' Gregory Paul singing "I'll Fly Away" to a group of early birds outside of the famous first Starbucks (we bought his cd last summer, so I feel all "familiar" about him) and the unmistakable scents coming from Piroshky, Piroshky... arguably the best smells in the world.  I even got a friendly head-nod from one of the produce guys that I buy from.  It was comfortable and pleasant, but it's also an outdoor marketplace so no huge surprise that there's all kinds of happy vibes floating around for me.

The beauty of the day wasn't one big shock, though.  It started rolling in slowly, like the sweet sound of thunder on a hot, dry day when you're desperate for rain.  I'm actually not being that poetic here, because it really was thunder that first surprised me!  Seattle is rainy, but doesn't get many of the crazy, electric storms that I love.  (I've heard one loud thunder since we've been here, and someone actually screamed and ducked for cover.)  But as we were killing time, walking the aisles of a shop downtown, I kept hearing it until I was finally sure.  A storm was coming.

We we not the least bit prepared.  I didn't even have a stroller and we were about 6 blocks from the bus-stop I wanted. But, we didn't have much of a choice!  I held Annika, Annika held Isa, and we sped from corner to corner, dodging smarter locals with umbrellas and getting drenched at every blinking crosswalk.  I finally got to a bus-stop but didn't see my bus listed, so I ran on to the next one that I saw.  Despite the wetness though, the air was actually warm and - maybe it's just me, but do you ever just feel like getting totally soaked in a rainstorm?

Annika squealed with laughter as she bounced on my hip and we splashed through the puddles.  She was even trash-talking the rain: "Hey, rain! You silly rain! You can't get me! Nope, you'll never get me wet!"

There was a group of older men huddled together under the tobacco store's awning. The storm seemed to remove all pretenses so I huddled up with them and asked for advice about the bus routes.  At first, a man answered my question and didn't bother really looking me in the eye.  But I was feeling happy, so I wasn't about to not be overly friendly to a complete stranger.

As I talked to him about being from the south, some of the other men started listening and volunteering themselves into the conversation.  But while we talked, another old, grumpy looking man squeezed through us and not only did not return my smile, but also curled his fingers like claws and said "boo!" to Annika, without laughing.  The men I'd been talking to actually scolded him. Annika just giggled and said, "I like to be scared," which made them all laugh.

Another guy had been holding a small bag of jellybeans and asked me if he could share with us.  He was eating them himself so that seemed safe enough, and I actually led the way in breaking the cardinal rule of childhood: Never Take Candy from a Stranger.  He held out his big hand to Annika and she carefully maneuvered her small one around his cigarette, grabbing at first one jelly bean but then as many as she could.

When he smiled at her and laughed, "It's good, ain't it?" my heart just about melted into happiness, remembering years ago, when one of my Bible club kids had shared his spicy Cheetos with me and flashed his neon-orange grin and said exactly the same thing.

My bus came and we all exchanged names and said "good meeting you" and they actually walked me to the door of the bus and made sure the bus-driver knew where I needed to be let off.  I settled into our seat and let Annika finish off the jelly beans in my hand, which were now rain-soaked and streaking artificial coloring down the sides of my wrist. I laughed, because it's just funny.  It's kinda funny that the little candy pieces that were in the pocket of a grizzly-looking black guy on the corner, smoking a cigarette with his buddies in the rain, were now staining my hands and Annika's teeth; the sweet ending to my morning. It's funny how all the lines we imagine between people really don't exist.

By the time we got off the bus, it had stopped raining.  We puddle-splashed our way home and by the time we got there, I'd taught Annika the chorus of "Raindrops Keep Falling on my Head."  We dumped everything in the wash and put on pajamas and cuddled up to spend the rest of the now beautifully sunny day indoors.  I don't mind though, for a Friday it's actually pretty quiet outside and perfect for a cup of tea and blogging.  (Strange how with all the traffic and construction outside, this would be an irritatingly noisy day in our small-town world, but I'm grateful for it here in the city.)

So, to wrap it up, I don't think I'll actually be teaching Annika to always take candy from strangers. (So calm down, Grandmas.) But it probably wouldn't hurt to teach her that every stranger is likely to have some sort of unexpected, sweet surprise tucked away where you can't see... and is more than willing to share.