There is Hope for a Tree - Is There Hope for Me? 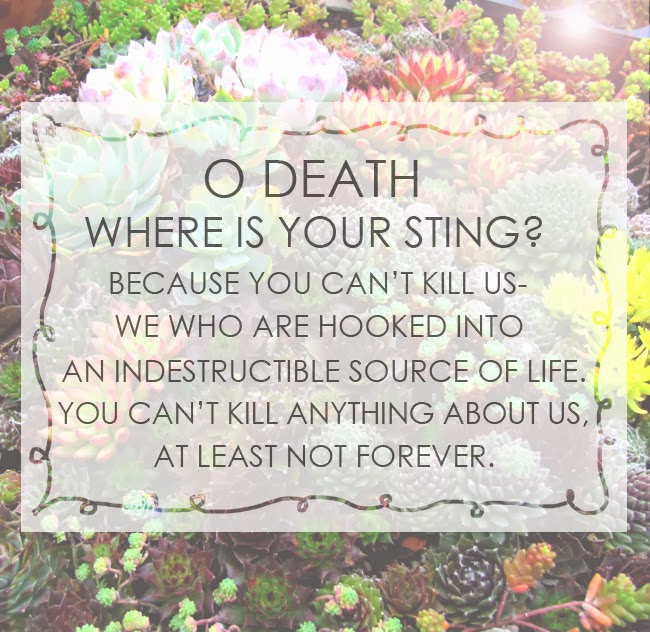 I have this little succulent plant that's dying.  It's actually only one half of a succulent, because I divided the plant into two pots - one inside, one outside.  The outside one is doing fine, the inside one is dropping all it's leaves and the fat, juicy stems are shriveling up.

It really bothers Annika because she's been watching Sid the Science Kid and she knows what plants need - just sunlight and water, Mom, it's easy!

And then yesterday she was sad about the dying succulent and said, "Just keep trying, Mom, because a plant can die and then you can give it sun and water and it will come back to life. It's not like people.  People just die and then they are dead."

I decided to talk about the plant part instead of the dead people part.

I told her how plants only come back to life if the above-ground-part has died but the deep parts of the root are still alive. Then new things can grow from the roots again.

And we probably both wondered if the succulent's roots were dying or not.

Then this morning, the strangest thing happened. I flipped my Bible open to the spot where I had last shoved my pen and noticed an underlined section that said this:


For there is hope for a tree,
if it be cut down, that it will sprout again,
and that it's shoots will not cease.
Though it's root grow old in the earth,
and it's stump die in the soil,
yet at the scent of water it will bud
and put out branches like a young plant.
But a man dies and is laid low;
man breathes his last, and where is he?...
...If a man dies, shall he live again?


How weird to think that my five year old has uttered the same thoughts of a grief-stricken Job so many, many years ago.

I didn't remember underlining the verse or ever even hearing it, but next to it I had written Christmas 2012 and "hope against all odds."  Which means that someone had read that verse last year...that sad, sweet Christmas when we were mourning so many things.  Us with our miscarriages, children taken from my womb, our brother and sister with their failed adoption, a son taken from their arms.  We bore each other's burdens and clung to hope for one other, hoped against all odds, that we would all be happy again.  That new life was going to bud from the dead stumps of our disappointment.

Job knows that there is hope for a tree, but wonders if there is hope for a man.  I get that.  Because I see the resilience of Creation, the perfection of it all, the purposefulness of the cycles.  Life, death, life, death.  But when we die, when I am cut down, what hope is there for me?

And not just in those sadnesses.  What about all the other ways we feel dead sometimes? What about the parts of me that are shriveled up - my character, my gifts, my soul, my callings - what about the places that aren't thriving simply because I have't abided as I should?

What about that friendship where I could and should have invested so much more, and now it's gone?

What about that opportunity, that offer of life as newlyweds in Botswana that we let pass us by, and then slipped out of our fingers forever?

What about all these years that I have spent only half loving God, half loving my neighbor, and only half-way even wanting to be anything more than luke warm?

When I let something die, will it ever rise again?

This is the part where I want to be the tree.  I want there to be more to me than what is above ground.  I want to hope that I have old, old roots stretching so far down that it can reach it's own water.  I want to hope against all odds that I can be cut, sick, dry, dead, brought to nothing again and again... and yet at the scent of water I will bud and stretch out my branches like a beautiful young plant.

Its probably why Jesus talks about the vine and the branches the way that he does, reminding us that he is the one that keeps on living and we just hang tight onto him. If I was my own source, if I was just a man on his own, without any connection to a life-giving vine of a God, then my death would just be death.

I can learn from my mistakes without God. I can try better next time, work harder, think smarter.... but I can't bring the dead things back to life again without him.

Oh death, where is your sting? Because you can't kill us... we who are hooked into an indestructible source of life. You can't kill anything about us. At least not forever.

There is no dying part of me that isn't ready and waiting to burst forth into life again.

Job begs God to bury him. To stop chopping him down and just hide him away underground, like a secret root, where he can wait for the time of his renewal. He says, "I would wait... [and then] you would call, and I would answer."

In his pain and questioning, he isn't sure how anything works anymore. But he dares to hope that God might call him out of death and into life.  He hopes against all odds for redemption.

Job found it to be true and so have I: There is hope for a tree, there is always hope for me.