When I'm Afraid and Jesus is Asleep 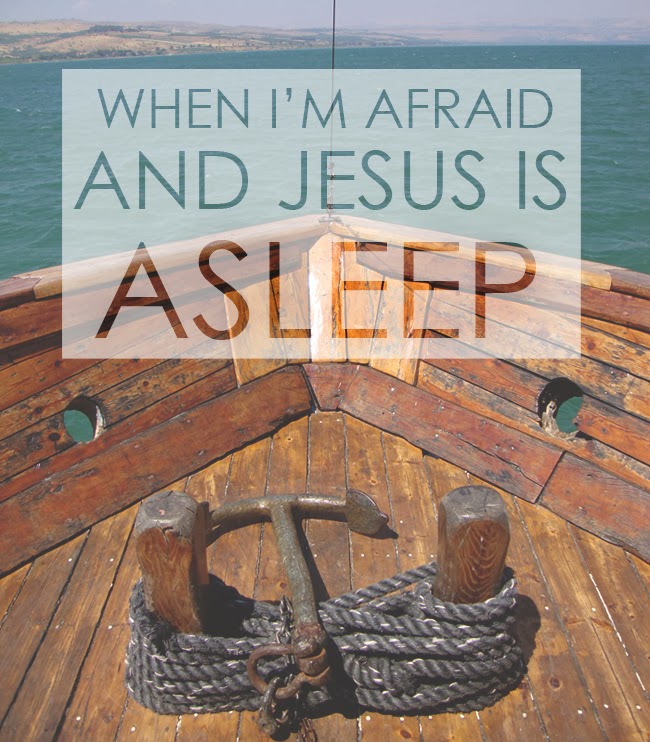 It is evening on the sea of Galilee.

It is still and quiet, except for maybe the hushed, night-time voices of other sailors traveling through the night.  The sky is dark and so is the water, reflecting the moon and the light of an old, star-filled sky. One that the likes of us have probably never seen.

But suddenly there is a wind sweeping in and the boat begins to rock and creak. The sails are flapping violently. The disciples are struggling to regain control as waves rise up and slam down around them, filling their little boat with sea water.

The disciples are terrified.

And Jesus? Jesus is asleep.

They feel they are in real danger and they understandably panic; they go to him and wake him the heck up.

Winds are howling and water is rising around their ankles and they are shouting to one another, trying to survive this great storm that has caught them so suddenly and Jesus is “on a cushion” in the back of the boat, sleeping like a baby.

They wake Jesus up because what in the world?!

And Jesus wakes and rebukes the wind and everything is quiet. But then he says something quirky and strange and a little awkward for everyone.  He says... “Why are you afraid, oh you of little faith?”

I imagine the wet huddle of disciples are exchanging glances here. Umm… because we were about to die.  And…uhh… you were sleeping.

The story says that they were amazed and filled with awe to see the wind and waves obey Jesus, but I have to think that there was also shock and confusion at his response. (It’s kind of funny, seems like those are the common emotions for those poor guys: shocked, confused and filled with awe. They really had no idea what they were signing up for.)

The storm was crazy. The boat was sinking, or so they thought. Don’t they have every right to freak out a little bit? It’s not like Jesus was coaching them through it, promising survival, and then they didn’t believe.

No, there was the storm and there was silence from Jesus.  So they cried out, they roused him, they asked him to stop the storm.  So far all signs point to “normal” here.

And yet Jesus.. strange, mysterious Jesus… he says, “Why are you afraid? Don’t you have any faith?”

Huh? Jesus, how is this a faith issue?

Catch the last bit of this post over at the Abingdon Women Blog!