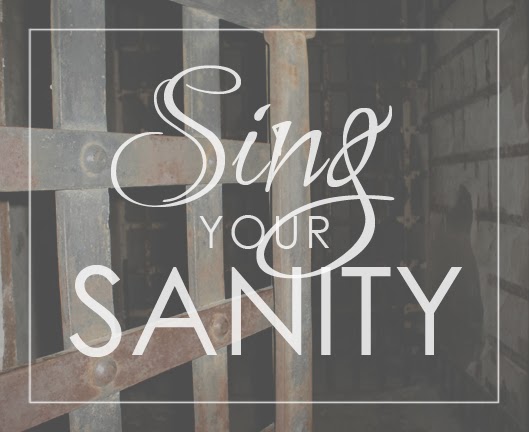 There’s this scene in Acts where Paul and Silas have just been thrown in prison.

The “inner prison”, to be exact, which sounds even deeper and darker than “regular prison.” There’s no details on how it looked, how it felt, how it smelled… but we know that around midnight, the boys are bursting out into song.  They were “singing hymns to God” in the inner prison.

Up until recently, I envisioned them chained to walls with glowing, smiling faces… purposefully singing loudly for all the other prisoners to hear… overflowing with a joy that couldn't be stifled by mere circumstances. Prison got nothing on Paul and Silas! They would just praise God all the more! Right?

But then I was watching a show on television where someone got thrown into solitary confinement.  At first she was okay but then she started to lose it a little bit. She started trying to keep herself busy – doing pushups, reciting things, braiding her hair. Anything to hang onto the last little threads of sanity that were threatening to unravel.

I thought about what I would do if I was stuck in a small box with no windows and my first thought was that I’d do Yoga (I don’t do Yoga ever, but it was my first thought) and sing every hymn that I could dig out of my memory.

That’s when Paul popped into mind.  I suddenly wondered if their singing was maybe more of a survival exercise than a happy praise moment or evangelistic performance. Maybe it was midnight and they were exhausted but couldn’t sleep because their chains were rubbing the open wounds from their recent beating, or the sounds of desperate moans and scurrying rats sent chills down their spines or they were simply riddled with the frustration of being thrown off course.


Sidenote: I know Paul was an emotionally reactive guy.  I actually thought it was a little funny that they ended up in prison after Paul cast a spirit out of a young girl – not because it was harming her or anyone else, but because she had been following them for days and crying out constantly (“these men are servants of God!”) and just it finally got on Paul’s last nerve.  He became “greatly annoyed”, turned to the girl and cast the spirit out.

So here they are, in the inner prison. And I wonder if his emotions were getting the best of him again.  I wonder if he was tempted to feel impatience, despair, anger, confusion, discouragement… tempted to lose his mind a little bit in that deep, dark prison.  If so, then I can see myself in him a little more.  And he does what I think I would do, the only thing he can do, really:  he sings about God. He sings to God.

Catch the end of this post at Abingdon Women's Friday devotional!

And then let's chat... do you have a song that helps bring you back to sanity? Maybe it's not a Christian song... sometimes Florence + The Machine brings be straight to the throne of God. I'd love to hear what makes yall lift your hands in the shower or dance in the kitchen or miss your turn because you forget to pay attention to where you're going.  Not that I've ever done that.