Brokenness and Bravery (Thoughts on Race and Racism)

When Michael Brown was killed, the internet exploded.

There was such a profound, emotional response to all the issues that his death brought to light and I (like I'm sure everyone did) ended up reading a lot of articles and opinion pieces in the aftermath.

Some of what I have read has been enlightening and overwhelming, to say the least.  But there has been other stuff... stuff that has felt twisted and weird, even though the high level of viral shares would seem to speak otherwise.

One blog post was a How-To about having conversations about race with your kids.  There was dialogue between a mother and daughter about Native Americans and how awfully they were treated by the early American colonists. What threw me was how the mother kept saying "we" when referring to the colonists....  We did those awful things because we wanted their land. We were afraid of them so we pushed them out and we killed them.

America is largely made up of immigrant families and their descendants, right? So it seems like odd language to encourage loads of readers to use. I know my family background is mostly eastern European with a little Spanish and French mixed in. My dad's side of the family came from Czechoslovakia just a few generations ago. I just wouldn't consider the pilgrims to be my people.  But obviously the idea was that the colonists were the white people in the story, and so they are the ones that we (as white people today) are forced to identify with when we have those kind of conversations.

And lets be completely honest, yes- we can certainly identify with them.  But that's not racial affiliation, it's just humanity.

We can all relate to fearing what is different, wanting what doesn't belong to us, resorting to violence or aggression, taking advantage of others, or lusting after power and control. Any person with a human heart can identify with at least some of those ugly feelings... unfortunately our imperfection is something that will always unite us as human beings.

When we look back through history, if we're honest with ourselves, we should all be able to see ourselves in the "bad guy" sometimes.

But then, there was another blog where a mother ended with saying that, while she may not have to fear her son being shot because of his skin color, she did have to fear him becoming the shooter one day.

Are we trying to say, starting to believe, that a child's whiteness makes him more inclined to be a murderer?

Is that really the kind of thing we want to say?

And if not, then what is it that we really want and need to communicate to our kids as we teach them (and we must) about racism?

I remember learning about slavery for the first time, a little white girl in small-town Georgia.  When I heard the stories about how people with white skin forced other people with dark skin to be their slaves and I was outraged.  I became obsessed with Harriet Tubman and the Underground Railroad.  I stalked through the woods in the back of our house singing "Follow the Drinking Gourd." I never thought to identify with the slave owners because I knew they were wrong, instead I felt my heart race when I thought about the abolitionists, the runaway slaves, and the people who hid them.  I wondered if I'd be brave enough and good enough to risk my life for someone else's freedom, I wondered if the Christians were allowed to straight-up lie to protect a runaway. (If you're wondering, I think the answer there is ABSOLUTELY.)

So last week I saw an image circulating the internet of little Ruby Bridges (Annika's age) taking the first steps towards desegregation at a formerly all-white school.  She was so small, so courageous. I immediately wanted to share the story with Annika, so I started doing some research and pulling up other photos.

And then I ended up staring into another photo. 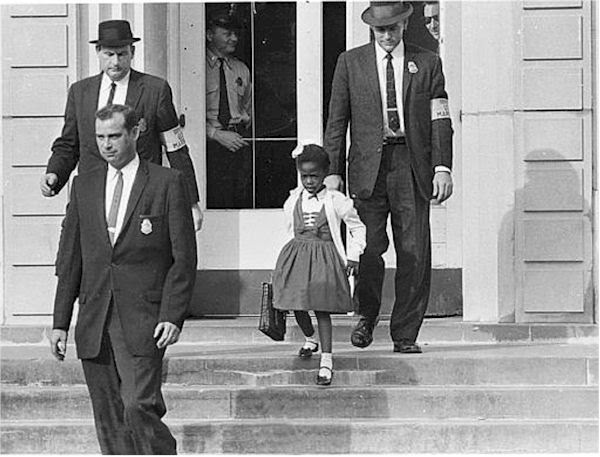 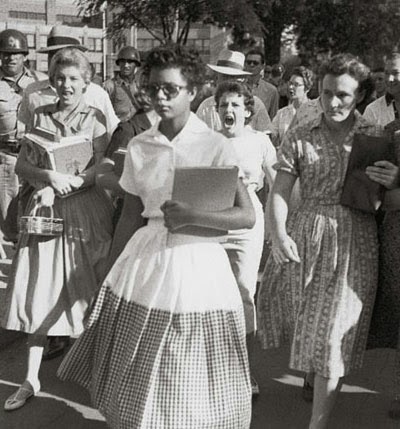 Going back and forth between the two, my heart was conflicted.

I wanted to show her images of bravery conquering fear, I wanted to ignite her little soul with stories of courage and righteousness in the face of ignorance and injustice. But now, I hesitated. I looked a long time into those white women's faces... one screaming and hurling insults, another in her flowery dress, marching steadily with such hate in her eyes.

I was all rambly in my brain with the words and attitudes of bloggers, magazine articles, and status updates.

I had wanted to tell her these stories so that she could identify with Ruby as a brave, six year old little girl.  I wanted her to identify with human beings who stood up to something wrong, specifically racism and segregation, and who took scary risks that would begin changing the world.

But now, instead of being inspiring stories about humanity and courage and equality, I felt like the world today wanted me to tell them as frightening, cautionary tales about white privilege and our natural and unique inclination towards bigotry. I felt like I was supposed to be making her aware of her part in systemic racism.  I felt that I was obligated to tell her, "You are not like the black girl in that photo, you are like the white girls." And I worried that I was in denial if I didn't.

The simple truth is, I don't want Annika to identify with the majority of the "white folks" in those stories. I don't want to communicate that we are from shameful stock, and she is guilty of personal choices she has yet to even understand or make for herself.

Instead, I want to examine these stories and see where we land as human beings.  I want to ask hard questions about ourselves. I want to teach her how to search herself and admit when we might be acting like those women in the second photo, even in the quiet and secrecy of our heart.

Are we being unfair to others? Are we being selfish and wanting to take from others so that we can have more? Are we being proud and believing that we are better than someone else?  Are we judging and making decisions about people before we truly know them?

I do realize that I must open her eyes to discrimination and help her to see the ways in which things are not equal for everyone.  Because of these recent events, I've recognized ways that my perception of the world has been shaped by racism without my even knowing it, so I want her to be part of a more discerning generation. And I especially want her to know - when you realize that you benefit from some kind of privilege (racial, educational, financial, spiritual, whatever it may be) that privilege can be a powerful tool, used for the glory of God and the good of others.

When I tell these stories about Harriet or Sojourner or Ruby, or Trayvon or Michael Brown, I want to be honest about how racism influenced the attitudes and actions of others.  But I also want to look beyond a story of race vs. race and tell instead the same stories of fear, judgement, ignorance, pride, corruption or greed (things we are all capable and often guilty of) being met with courage, boldness, perseverance, and self-sacrifice.

We all have the potential for those things, too.