All The Waves // A Hard Look at Hope 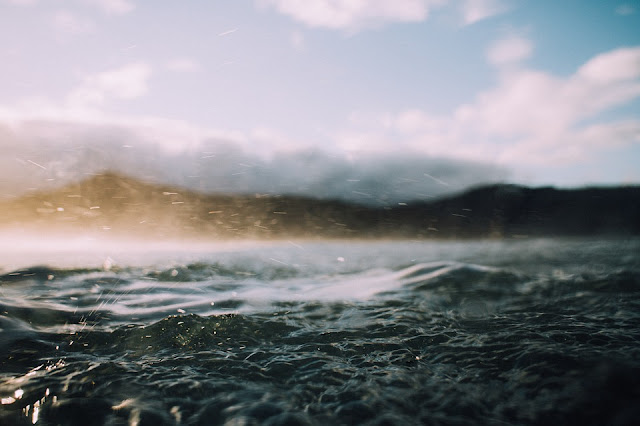 I feel like moving my fingers in a way that is kind of like dancing, but without all the self-awareness of moving my body. There's a rhythm and a beat coming from the radio and I want to move with it, to be awash with it and cleansed from the feedback loop that keeps playing like a broken record in the background of my thoughts. Singing this new song feels better. Dancing to something that is new and fresh and changing and beating with praise. It's loud in my ears and I feel it rising in my blood like truth.

So many things that are worthy to praise. So many reasons to forget the pressure that weighs in from most sides. And yet, fear and distrust want to say their piece and they come leaking in on all sides. It swirls around my ankles and I can't kick it away. It rises and crashes in, unwelcome. I could so easily just surrender and drown.

The only way to stay afloat from that kind of wave is by clinging to something and there are so many things rushing past that I could grab hold of. Bitterness is there, that decaying and rotten driftwood that always comes back with every new wave of trial. The waters are poisoned all around it and everything crawling on it gets on me, too. All the scoffing, sarcasm, and cynicism creeps its way into my skin like a disease every time I let myself even begin to reach out that way.

Fear is there, floating around like it's full of life, like holding onto it will help keep me afloat, and yet somehow I touch it and takes my breath away. I go under every time.

There is nothing worth hanging onto around here. Nothing to keep one afloat when time is ticking and stress is mounting and the dream looks further and further away.

Why do I always want to question God? Just like Job, I confess that he is Lord but I question if he is good because how does this make sense?

God brought me to the book of Job just in time and I read it like a prescriptive drug. Job wraps his already-leprous finger around Bitterness, trying to stay afloat amidst waves of painfully sovereign disaster. "You write bitter things against me," he gasps out from underneath the waves. To GOD he says, "You put my feet in stocks."

That upright Job, even with all his blameless service to God, he is flailing. He sees the inequity in his life, the seemingly-senseless disaster, the Life Well Lived that hasn't been properly rewarded with lifelong prosperity and he just can't handle it.

"Man is few of days and full of trouble... Look away from him and leave him alone that he may enjoy, like a hired hand, his day."

Haven't I learned by now?

Here's something new I've realized: I'm terrified to hope for something that God hasn't already promised me. I have desperately hoped for prayers that went unanswered and I wasn't sure if I'd ever find myself on the other side of that shattered faith. But my good friend C.S. Lewis told me how my idea of God was never divine in the first place and that God was the great Iconoclast who would himself shatter the images of him we make, and that actually the Shattering was a mark of his presence. Emmanuel, God with us, cannot help but turn things right side up.

So even though previously I had shared a decent theology with Job's friends that God would deliver the righteous from evil, and if you weren't delivered then you probably weren't doing it right - it was shattered into a harder, holier faith that wrapped it's feeble mind around disaster, trials, tribulations, persecutions, pain, and heartache being a natural part of our Christian lives.

That being said, I find myself very uncomfortable with hoping for an outcome that I really, truly, desperately want but am not totally sure God is going to give. I prayed for Banjo to be returned, but the more that time passed, the more I began to accept that it wasn't going to happen. Bitterness and trust wrestled within me that entire time. I wrote about what God taught us through that, how I recognized that my faith needed to be NOT in the guarantee that God would return him to us, but only in his sovereign ability to do so. It felt good to have something solid to cling to, and that was enough.

And now we find ourselves waiting again. Waiting for God to do this specific something on our behalf and seeing the inevitable "other" creeping closer and closer while he doesn't. I find myself grieving every time I think of the life I had imagined in that old house with it's old walls and many rooms. I wonder why God opened so many doors that would eventually lead us through that old door, when I would quietly walk the halls, envisioning so much life in that house (past, present, and future) and feeling all the pieces fall so comfortably into place. I wonder why he would hold a glittering, golden apple in front of me, only to take it away.

It feels cruel. If this was not the house we were meant to have, I would obviously preferred to have never seen it. If the Seattle housing market was going to hit the brakes and come to a screeching stand-still the moment after we listed our house, I would have appreciated some different timing on this move. If we were not going to sell our house in time, it would have been awesome to avoid unrealistic dreams and expectations. I find myself behaving just like Job and believing that God has treated me bitterly, that he has tricked me and hurt me. That he himself led me to desire, only to revoke the object of my desire for the sake of some painful lesson. Or maybe even an oversight on his part. A mistake that wasn't necessarily meant to play out this way but, you know, these things do happen and he's clearly a busy man.

I do break his heart.

What does it say about me, and what I believe of God, if I'm afraid to pray for something that I want? It's a whole new Shattering. I have learned to put my hope in God and not my circumstances or the outcomes of my prayer, but now I'm afraid to hope at all.

Because the broken mess of a king, David, had his fair share of trouble. His choices in life were way more messed up than Job's, and yet he's called a man after's God's heart. I have to think it's because he does a little flailing but, that guy? He clings hard to hope.

While Job is awash with grief and believing that he must be a targeted mark for God's undeserved wrath, David laments his pain, begs God to act, questions his silence, but (nearly) always concludes: "I have no good apart from you."

You make known to me the path of life;
in your presence there is fullness of joy;
at your right hand are pleasures forevermore.

(Second thought. Correction, Mr. Beaver to Susan: "Who said anything about safe? 'Course he isn't safe. But he's good.")

My heart is safe with him because he is good. My hopes and prayers must fly out from my heart, because I will burst with containing them. What's more, because of the Holy Spirit actually dwelling inside my soul, shattering sin and birthing new and holy desires inside of me, those hopes and dreams belong to God. They take flight and go home.

And then I can rest.

But only for a moment because the tide still rises. The anxiety still pools up around my ankles and the hope starts to swell and beat it's wings, brutally, inside of me and I think sometimes I honestly don't know if I feel hopeful and happy or terrified. It feels almost the same on the inside.

I suppose I can't always have the faith to walk on top of these waves, but maybe sometimes faith is like an ark that I can climb inside when the waters rise. That kind of faith isn't a conquering victory, but a quiet enduring while he prepares another way. Hope is still alive inside, though perhaps hungry and weary and smelling like it's endured something fierce. I can ride the waves like that.

Because he has promised: Fear not, for I have redeemed you; I have called you by name and you are mine. When you pass through the waters, I will be with you; and through the rivers, they shall not overwhelm you; when you walk through fire you shall not be burned, and the flame shall not consume you. For I am the Lord your God, the Holy One of Israel, your Savior.

I'll keep releasing my most treasured hopes, in faith that it might return to me with promises, but until then? I'm safe in here, with him. Hoping.